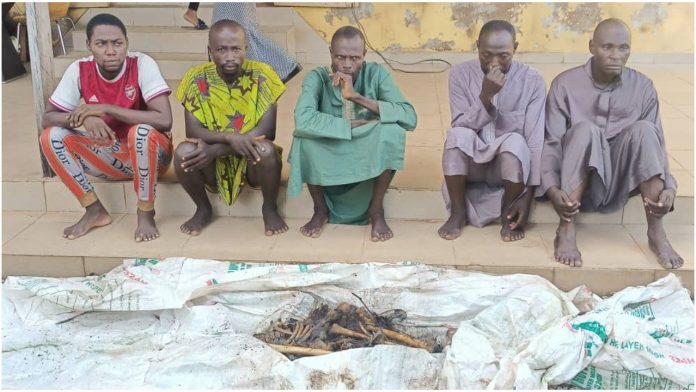 After months of investigation, Kwara police eventually cracked the nut of a ritual killing scheme that ran from Ilorin to Bida and ended in Borno.

Caught in the dragnets were five men: the wannabe rich dude Samuel Peter Tsado; an accomplice Mohammaed Garba, a go-between Baba Pati, the juju-money specialist, and one other.

Their victim was Abigail, a prossy operating out of a hotel in Patigi, Patigi LGA, where Samuel Peter Tsado lived, and desired to leave when his ships come home.

Five suspected ritualists have been arrested by the Kwara State Police Command over the alleged murder of a sex worker simply identified as Abigail for money ritual purposes.

The spokesman of the state police command, Okasanmi Ajayi, said the suspects committed the crime on June 28, at about 11 pm.

After the fee of N5,000, was sealed,  Tsado and Abigail left the hotel. That was the last neighbours knew of Abigail.

Because following that hour, Abigail was a goner. Her  head was already off her neck, and torso dumped in a bush.

“On the receipt of the report of a missing person, the state police commissioner, who suspected a foul directed the case be taken over by the state Criminal Investigation Department, CID, for discreet investigation,” the spokesman stated.

They got a lead to Tsado.

Then the mystery unfolded.

According to the police, Tsado and Mohammed Garba had readied a plan to get rich fast—by way of money rituals. In that wise, they needed a human skull, as their herbalist had prescribed to them.

“They planned on how to source for a human head that would be needed for the money rituals, which prompted Tsado to leave his house at Patigi for Victory Hotel, on his motorcycle,” the police said.

“He approached the late Abigail, a sex worker who agreed to follow him home for N5,000 a night.”

Garba was already waiting at home.

Abigail just stepped in to the ambush. They both strangulated her.

“The head of late Abigail was severed with a knife, and her headless body was conveyed by the suspects on Samuel Peter Tsado’s motorcycle and dumped in the bush along Patigi-Rifun Road,” police said.

The duo had been killing people for rituals before this incident. So Abigail’s was one of those things.

After that Garba departed, and both reconvened in Bida two days later. The head was with Abubakar aka Baba Pati.

Hs house it was where the Borno herbalist would come for the ritual.

The police was already sniffing around in Bida and Minna, looking for three other criminals on that scheme. And they were arrested.

They then led the police to the bush where Abigail’s remains decomposed.

Baba Pati keeping the head had already fled by this time—taking off with it.

But the police said he could only run.