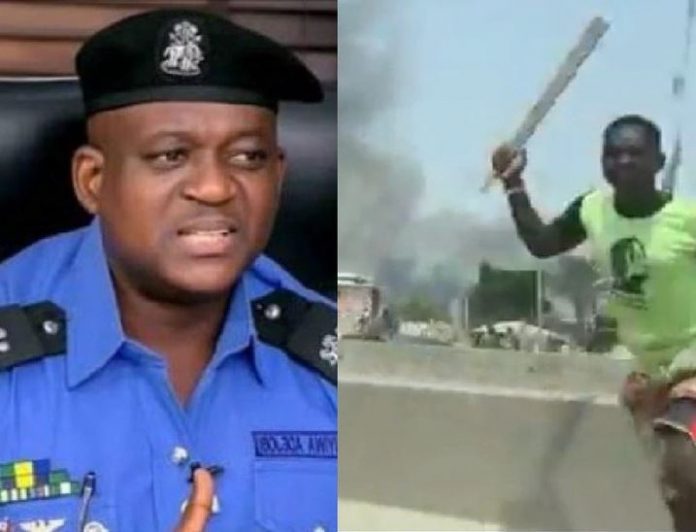 The police, through the Force Public Relations Officer (FPRO) Prince Olumuyiwa Adejobi, has reacted to a video that is currently being circulated on various social media platforms. In the video, you will see some youths wielding various weapons and attacking vehicles on the road. The rampaging youths were using sticks to hit the vehicles and destroying the glasses of the vehicles.

But the police spokesperson, Mr. Prince Olumuyiwa said there was no such thing as that. He said the attention of the Commissioner of Police, Abuja, CP Babaji Sunday, was drawn to the video being shared on various social media platforms. He said the incident was said to have happened in Lugbe, FCT Abuja. He said according to the Commissioner of Police who was on patrol in that area, there was no such thing as that. The CP urged all law-abiding citizens to go about with their normal activities as the police are on the ground to protect lives and property, Price Olumuyiwa said

“The attention of the Commissioner of Police, FCT Police Command, CP Babaji Sunday, has been drawn to a video making the rounds on social media platforms about an incident which is being credited to have happened in Lugbe, FCT Abuja.

“The CP wishes to state categorically that there is no such incident in Lugbe as he is currently on patrol with operatives around the Lugbe-Airport Road axis.The CP urges all well-meaning members of Abuja Community to go about their lawful businesses as the police is on its toes to ensure safety of their lives and property.” The statement from the police FPRO however generated some comments from other Twitter users.

One of those who reacted said the incident did not occur at Lugbe, but that it occurred at Dei Dei. He said yesterday, he called the police number given to him but the police did not pick up. He said he tagged the FPRO on Twitter but he got no reply. He then pleaded with the police to come to their rescue because his mum is in that area

“No it’s not lugbe you were misinformed it is DEI DEI I called the number you gave me times without number yesterday no one picked I tagged you and @PoliceNG got no reply my mum is there and hundreds of other people who can’t protect themselves please help🙏,” @SaheedL98846675 said