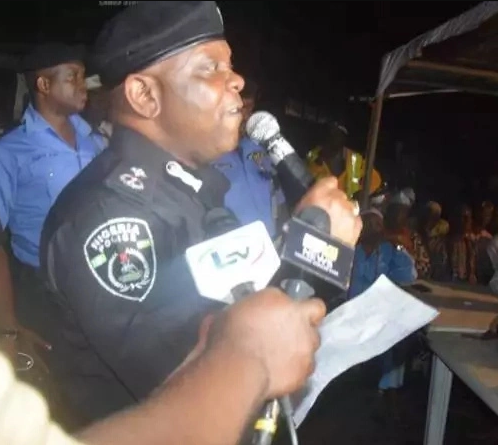 Amodu, a mother of four, gave the testimony as a defence witness in her trial for alleged conspiracy and armed robbery, before Justice Kudirat Jose.

The defendant, who denied the allegation, was arraigned alongside one Hammed Isiaka on a six-count charge of conspiracy to commit robbery and armed robbery, contrary to Section.295(2)(a) of the Criminal Law No 11 Laws of Lagos State, 2011.

One of the charges reads: “Hammed Isiaka, Victoria Amodu and others now at large, on or about August.12, 2014 while armed with a pistol did rob one Elizabeth Moses of a cash sum of N35, 000 and a cheque of N1.4m.”

However, while being led in evidence by her counsel, Nelson Onyejaka, Amodu told Justice Jose that she was unjustly arrested by the police on August 12, 2014 at Church Bus stop, Badagry, Lagos.

She said she was selling bread at the bus stop when policemen raided the area, arrested her and others and bundled them into their truck, where they met some men who were already tied up.

Narrating the incident, Amodu said: “I was arrested by the police while I was selling bread and taken to the station at SARS, Ikeja. An IPO (name not mentioned) there told me to call someone that would come for my bail. I called a neighbour, a lady that helps me look after my kids. When she arrived, the IPO said a woman could not sign my bail bond, which he put at N400,000.

“I became worried because I didn’t know any man to call since I was no longer living with my husband and I was also new in Lagos.

I decided to call my father but he refused coming to the station. He said since I was married he had no hand in anything concerning me.

“I didn’t know what else to do at this time, so I started begging the IPO to let me go and take care of my kids since I didn’t commit any offence. The IPO took me outside the cell to a corner and said that I am a pretty lady and that if I submit myself to him, I would be freed.

I got angry and shouted at him, asking why he would make such a statement to me. He immediately, dragged me back to the cell.

Some others who were arrested that day were released after they paid money, though I don’t know how much they paid.

“Nights after, the IPO brought out some case files and told me and others in the cell to sign them. He said that when we were done signing, we would be released. I agreed to sign the documents on the condition that he would not touch me.

But the other men refused saying they couldn’t sign what they didn’t know.

“The IPO immediately brought out his gun and threatened to shoot them if they didn’t sign and they fearfully signed it.

“After signing the documents, we were all taken to a Magistrates Court and from there, to Kirikiri Prison.”

Amodu pleaded with the court to tamper justice with mercy and permit her to go home to cater for her children.

During cross-examination by prosecution counsel, Mrs Awosika, Amodu denied knowing the first defendant, Isiaka. She said she had never seen him before and only met him for the first time in court on the day of arraignment.

Isiaka, a driver, who also testified while being led by his counsel, Mrs Olamide Amore-Akintoye, said he was arrested on his way from Seme border while carrying food items belonging to a customer.

He said his car was impounded and taken to the station where he was locked up after he failed to pay for his release.

Justice José adjourned till November 29 for adoption of final addresses.