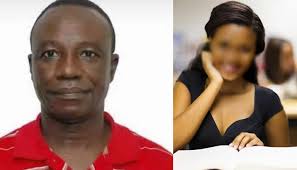 Share this on WhatsApp
Spread the love
Victim of the Obafemi Awolowo University, Ile Ife sex-for-mark scandal, Monica Osagie has said the lecturer at the centre of the scandal, Prof. Richard Akindele used to be her mentor.
In an interview with CNN monitored by National Daily, Osagie said their relationship went sour after he made sexual advances towards her.
Osagie claimed the professor scored her low in his course as a bait to get her to succumb to his proposal.
“Then, the next thing he told me was, ‘Can you date me?’ I was like, ‘No.’ He was like, ‘Why?’ I said, ‘One, I don’t date lecturers, and secondly, you are more matured than I am.’
“He kept calling me to ask if I was ready to accept his proposal. So, I decided to record our next conversation.”
Osaghie said she has faced criticism since the leaked audio conversation between her and Akindele surfaced online. “She alleged she was referred to as a “prostitute”.
“A guy came up to me at the bank and said, ‘Is this not the girl who harassed a lecturer?’ and he called me a prostitute,” she said.
“The security guard then had to push me away to go withdraw my money inside the bank.”
Osage, however, said rather than bow to intimidation, she is happy that she voiced out her experience.
“There is no work or … education that is worth your dignity, I will keep saying that,” she said.
“I am actually happy I came out. I am helping many ladies that have gone through the same thing I have gone through, and most of them can’t talk about it.
“They are scared of coming out in public. But I know it happens everywhere, not just in Nigeria.
“For me, speaking up will bring more women to speak and eradicate what is happening around young women and older men.”
An investigative panel set up by the institution to probe the case has suspended the professor indefinitely.
Akindele went into hiding after the audio went viral on social media.
The father of three daughters is an Anglican priest.
Share this on WhatsApp
Related Topics:Ile-IfeMonica OsagieObafemi Awolowo Universitysex-for-mark scandal
Up Next

Lawyer brutalised by police officers on order of CP