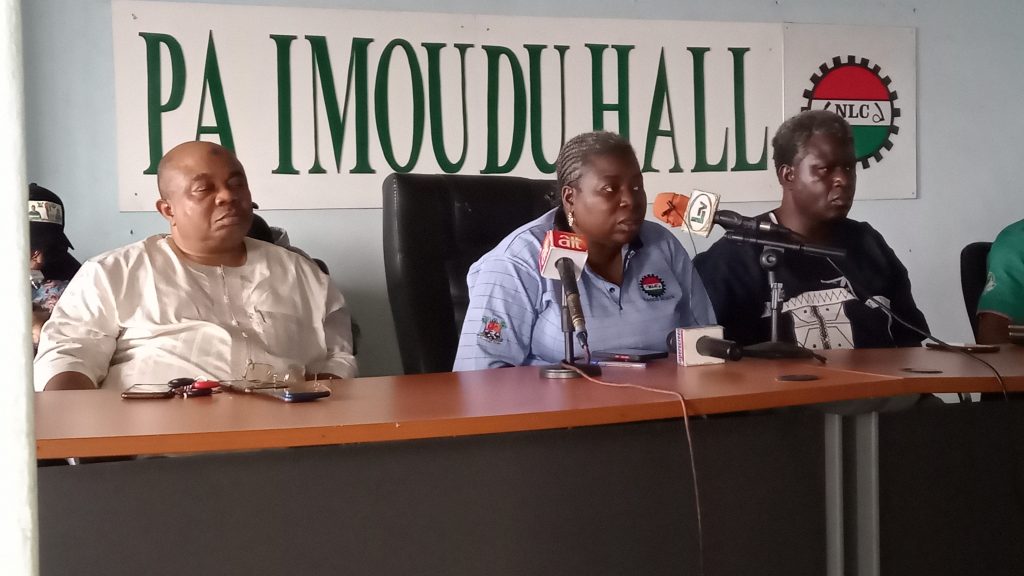 The Nigerian Labour Congress (NLC) on Monday called on members and civil society groups in Lagos State to come out en-masse on Tuesday morning to begin the two-day protest in solidarity with striking lecturers.

Mrs. Funmi Sessi, state chairman of NLC gave the directive at a stakeholders’ meeting at the union’s secretariat in Yaba, Lagos state.

Sessi said that the exercise was ready to hold on Tuesday and Wednesday as part of the nationwide action.

This is despite an appeal by the Federal Government that the NLC shelve the planned nationwide protest.

The Academic Staff Union of Universities (ASUU) has been at loggerheads with the Federal Government since Feb. 14 over the failure to honor some past agreements, among others.

The disagreement has kept students of most public universities at home for the past five months.

Some other unions in the university system are also on strike due to disagreements with the Federal Government for different reasons.

Sessi directed all sectors including health, electricity, and aviation to shut down operations and join the solidarity protest in support of the striking workers.

“The protest is to support ASUU in the ongoing strike, so we call on all affiliate members to come out en masse,’’ she said.

Sessi called on Lagos state-owned tertiary institutions to also join in the protests.

“We are going to mobilize our members and be fully on the street,” she said.

Sessi said that electricity workers would be part of the protest, but advised nurses to attend to only emergency cases.

She assured me that the union had adopted measures to ensure that the protest was not hijacked.

Sessions said law enforcement agencies should not brutalize their members.

ASUU Zonal Coordinator, Lagos State, Dr. Adelaja Odukoya, said the protest was for the liberation of the nation’s tertiary education.

He said lecturers were being paid slave salaries and the government was not concerned about the quality of education in the country.

Odukoya said the union does not like strikes but wanted to press home demand to make the nation’s universities competitive with global standards.

“ The struggle is in the interest of our children.

“Enough is enough, government must fund the education system. If Nigeria must develop, attention must be paid to our university education,” he said.

He said the strike had lingered for five months and the lecturers would not back down if the government does not meet the demands of ASUU.

Odukoya appealed to all Nigerians to join in the solidarity protest in the interest of the Nigerian youths.

Other union members took turns lamenting ill-treatment and injustice being meted out to the lecturers and the nation’s education sector.

The Federal Government had urged the Nigeria Labour Congress (NLC) to shelve the nationwide planned protest in solidarity with the trade unions.

Minister of Labour and Employment, Sen. Chris Ngige, appealed at a meeting with the leadership of NLC in his office on Thursday in Abuja.

Ngige said this in a statement signed by My Olajide Oshundun, Head, Press and Public Relations, in the ministry.

The News Agency of Nigeria (NAN) reports that the decision to embark on a `National Day of Protest was taken at the NLC National Executive Council (NEC) in June.

According to the minister, the Federal Government has made a lot of efforts to resolve the impasse in the university system, saying that efforts were still ongoing.

He also reminded the NLC leadership that he incorporated them into the tripartite conciliation going on in his ministry.

Ngige added that they were very much aware of the efforts of the government to resolve the impasse, so they could not embark on any rally or protest.

He further said that the Federal Executive Council (FEC) mandated him to notify them of the serious security implications of the planned protest.

Responding, both the Deputy President of NLC, Mr. Najeem Usman, and General Secretary, Comrade Emmanuel Ugboajah, had assured the government of a peaceful protest by the Congress,

They also said that infiltrators would not be allowed to participate in the protest.

Ugboajah had said NLC appreciated all the efforts of the minister towards the resolution of the industrial actions in the university system and pleaded with him not to hand off the conciliation.

Fake soldiers cruising round Lagos end up in police net