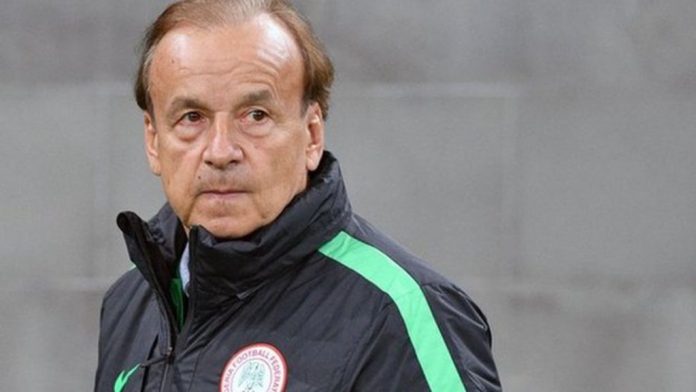 Some football fans in Abuja have expressed displeasure over Super Eagles 0-1 loss to Central African Republic (CAR) on Thursday at the FIFA 2020 World Cup qualifying game.

They described the loss as a huge upset as CAR, ranked 114, snatched victory few minutes to the end of the game to break the heart of the 36 ranked three-time African champions at the Teslim Balogun Stadium, Lagos.

It was the first time the Super Eagles lost a World Cup qualifying game at home since 1981, when it lost 0-2 to Algeria.

The visitors, who were solid and more coordinated at the back, were rewarded for their tenacity as they took advantage of a miscalculation between William Troost-Ekong and Leon Balogun, which left Karl Namnganda to fire his shot past helpless Francis Uzoho.

Speaking with the Newsmen after the match, fans blamed Super Eagles coach, Genort Rohr for the loss and called for his sack.

George Okon, a civil servant, who followed the game at a viewing centre described the team’s performance as woeful.

“Woeful performance by the Super Eagles of Nigeria against minnows Central African Republic. I was expecting 3-0 in favour of Nigeria. How did it happen that we couldn’t register a single goal?”, he queried.

“I have said it a lot of times that Gernot Rohr needs technical help. Infact, he is not a good coach. He should be sacked and a better coach be employed”, Okon added.

Wilson Ojonugwa, an amateur footballer exclaimed that CAR had pulled the biggest offset of the century.

“What a day! The Central African Republic have pulled off the biggest offset in African football this century.

“The Central Africans came to defend but were fortunate to have utilised the only chance they had but Eagles were tactically deficient and with the absence of Alex Iwobi, things became complicated.

“It’s so sad that we had to lose on our home soil. I also don’t think that the coach is putting his best to the team. Probably, our indigenous coaches can do better,” he concluded.

Bala Mohammed, a fitness trainer said Rohr had not added any value to the team.

“After five years in charge of the Super Eagles, there’s no evidence or cohesion between the boys. Eagles losing to CAR in Lagos is unforgivable. Rohr has added no value.

“If Super Eagles had a sound manager with technical ability, surely they’ll not lose against CAR. One can’t tell why the Nigeria Football Federation and president Amaju Pinnick are still holding onto Rohr. He should be sacked,” Mohamed added.

Meanwhile, in spite of the dropped points in Lagos, Eagles remain at the top of Group C with six points after three games while Central African Republic have moved up to the third spot with four points from the same number of games.

Earlier on Thursday, Cape Verde Islands fought back to defeat Liberia 2-1 at the Ohene Djan Sports Stadium in Accra.

They are level on four points with CAR while Liberia dropped to the bottom with three points.

Nigeria will continue their journey to Qatar 2022 with a trip to Douala for their return fixture against the CAR on Sunday.