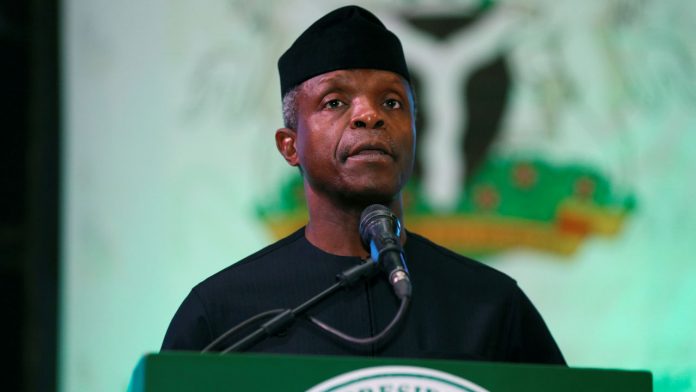 The Federal Government says it has commissioned several sites in the six geopolitical zones of the country toward actualising its promise of electrifying five millions homes with solar energy by 2023.

Osinbajo who was represented by the Minister of State for Environment, Mrs Sharon Ikeazor, said the effort was part of the country’s direct energy compact.

He said the project, expected to affect 25 million people, would also create 250,000 jobs.

“The implementation of this job is underway with several sites commissioned and being executed by the private sector and support from government,” Osinbajo said.

He noted that the Federal Government was eager to follow to a logical conclusion its national energy system and policy via renewables, to ensure a cleaner source of energy for Nigerians.

“Over the next decade, every aspect of national energy system is expected to be affected by the climate and energy policy.

“However, the transition needs to speed up significantly its scope to achieve SDG 7 in line with the goals of the Paris agreement on climate change but while at the sametime achieve the 2030 agenda for sustainable development.

“Nigeria has developed its energy transition plan which has three core objectives of achieving universal access to energy by 2030, zero emissions by 2050 and industrialisation to alleviate poverty and drive economic growth.

“While this plan has given us a roadmap with which we can accelerate our transition, it has also highlighted the skill of effort required.

He said, to achieve all these, policies supporting enabling deployment and integration of renewable energy and energy efficiency must go hand in hand with a broader set of policies.

Osinbajo said these policies must ensure that industrial and other economic capabilities were aligned with the COVID-19 recovery and other environmental objectives.

Chairman of Seplat Energy, Mr Ambrosie Orjiakor, noted that the company had started increasing production for LPG to replace dirty sources of energy for cleaner environment.

“Our real message for energy transition is the fact that there is a shift from the energy mix that the world requires; that the environment of Nigeria and Africa require.

“So, it means that as the entire globe is speaking to the action plan on climate, there is a consensus of opinion that disasters are as a result of human activities in the planet.

“But it has been identified that carbon dioxide emissions are related gases, particularly the greenhouse gasses are responsible for the depletion of the ozone layer and causing excessive global warming.

“Addressing this problem is why you hear zero emission, carbon neutrality and zero forsil fuel.

“At Seplat, our purpose is to deliver renewable energy solution to the society; that is why we exist. Our vision is transformation of life through energy,” Orjiakor said.

The Group Managing Director, the Nigeria National Petroleum Corporation, Malam Mele Kyari, said the corporation would continue to take advantage of the time to transform the country’s energy sector.

“We are taking advantage of the time as it has been said that even in 50 years time, we will still have up to 100 million barrels, as we are not out of the oil age.

“We should look for transition that would work for everybody in this part of the world; we are not giving up on gas utilisation, especially the LPG,” Kyari said.

Mr Simbi Wabote, Executive Secretary, NCDMB, said the organisation had already keyed into the energy transition instructions and had been acting as catalysts, and also involved in investments that projected gas.