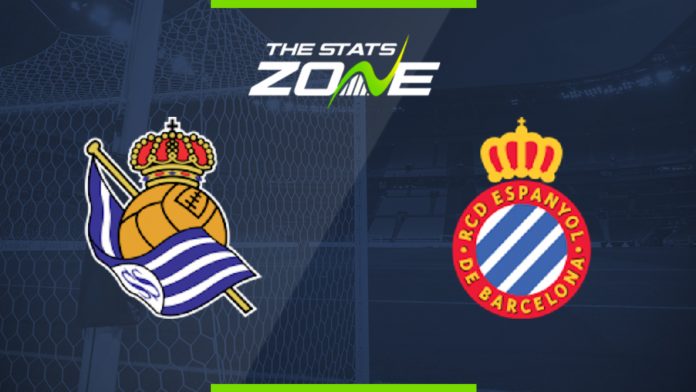 Two sides looking to end their respective winless runs in La Liga will lock horns on Thursday evening as Real Sociedad welcome Espanyol to the Anoeta Stadium.
Sociedad remain in the hunt for a European place as they lie seventh, whereas Espanyol are rooted to the bottom of the table after 32 matches.
Sociedad are still very much in the running for a top-six finish, but their hopes of Champions League qualification were dealt a huge blow as fellow European hopefuls Getafe enjoyed a 2-1 victory against Imanol Alguacil’s men on Monday night.
Two goals from Jaime Mata either side of an Adnan Januzaj strike condemned Sociedad to their fourth successive defeat in the Spanish top flight, and the Whites and Blues are still searching for their first win since La Liga returned to action earlier in June.
Sociedad have accumulated 47 points from 32 games this term, which leaves them four points off sixth-placed Villarreal and seven adrift of the top four at things stand.
The coronavirus-enforced shutdown could not have come at a worse time for a Sociedad side who had won seven of their last eight in all competitions before play was halted, and Alguacil will no doubt be aware that Thursday’s clash with Espanyol represents the perfect opportunity for his side to get a vital three points on the board.
The Whites and Blues will be aiming to register their first home win since February in midweek, having drawn to Osasuna and lost to Real Madrid and Celta Vigo at the Anoeta Stadium following the league’s resumption.
Meanwhile, the threat of relegation is looming over Espanyol as they remain in 20th place with six gameweeks of the season remaining.
Los Periquitos lost their third game on the bounce against table-toppers Real Madrid on Sunday, with Casemiro netting the winner for Los Blancos just before the half-time whistle.
Francisco Rufete’s first game in charge could not have been a more difficult fixture against an in-form Madrid side, but the defeat to Zinedine Zidane’s men means that Espanyol are now 10 points adrift of safety at this late stage of the campaign.
Los Periquitos restarted their season in perfect fashion with a 2-0 victory over Deportivo Alaves, but Espanyol have since been unable to carry that momentum forward and will need a miraculous turnaround if they are to produce a great escape from the relegation zone.
The chances of La Liga’s basement side kickstarting a revival against European hopefuls Sociedad is highly unlikely, though, as Rufete’s men have only picked up one league win away from home in their last 11 attempts.
Sociedad enjoyed a 3-1 victory in the reverse fixture back in September, with Willian Jose and Alexander Isak on target for Alguacil’s men at the RCDE Stadium.
Sociedad will welcome Diego Llorente back from a suspension which kept him out of the loss to Getafe, and the Spaniard is in line for a return to the defence.
Alguacil has a number of injuries to contend with, though, as Luca Sangalli, Asier Illarramendi, Ander Guevara and Ander Barrenetxea all remain on the treatment table.
The Sociedad manager may revert to a back four on Thursday evening, and there could be rotation up top with Jose, Portu and Martin Odegaard all vying for spots in the first XI.
As far as Espanyol are concerned, Sebastien Corchia remains sidelined with a knee problem, while Facundo Ferreyra and Pipa are both doubts for Rufete’s men.
The Espanyol boss could look to make a couple of changes to the side that lost to Madrid, with Adria Pedrosa and Oscar Melendo potentially in line for starting roles.
Prediction:  Real Sociedad 0-0 Espanyol
Neither of these sides inspire much confidence heading into the business end of the season, and Espanyol should fancy their chances against an out-of-sorts Sociedad side. However, we are backing the superior quality of Alguacil’s men to pave the way for a comfortable home victory as Sociedad look to get their charge for a top-six finish back on track.