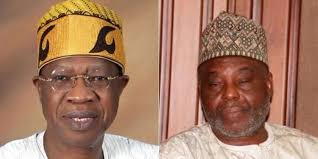 Share this on WhatsApp
Spread the love
Chairman of DAAR Communications, Chief Raymond Dokpesi has threatened to slam a N5bn suit on the Minister of Information and Culture, Lai Mohammed over the inclusion of his name on the list of looters recently released by the Minister.
The minister had at a press conference listed Dokpesi, who is standing trial for allegedly receiving N2.1 billion from the office of the national security adviser (ONSA), as part of those who looted the country’s treasury.
Responding in a letter dated April 4, Mike Ozekhome, Dokpesi’s counsel, asked Mohammed to “immediately” publish a retraction in four newspapers and pay a sum of N500 million.
Ozekhome said if the minister fails to comply with their “minimal demands”, they would have no choice but to commence legal action against him.
“Contrary to your derogatory, disparaging, mendacious and unrestrained defamatory statements, as published in various print, electronic and online media platforms, of and concerning our client, our client has never been associated with the looting of the public treasury,” the letter read.
“Before the court where he is currently standing trial on trumped up charges brought against him by your same federal government, he has categorically and unambiguously denied the said charges. At the ongoing trial which has been stalled serially by the federal government with series of requests for adjournment, our client has neither been found guilty nor convicted by the trial court or by any other court in Nigeria.
“The brazen defamatory statements/ publications of alleged looting of the public treasury mentioned by you against our client are most damaging and clearly rubbish the hard-earned reputation of our client. Our client has since received several and unending phone calls, mails and visits from relatives, friends, associates, as well as other well-meaning Nigerians, who have ceaselessly called to express their shock over the vile allegations in the said publications.
“Our client has suffered severe public odium, approbrium, ridicule, psychological trauma, untold embarrassment and countless business losses consequent upon your reckless publication which has put him in bad light before reasonable members of the society.
“Unless you carry out the above minimal demands immediately, to redress the incalculable damage done to our client’s [image], we shall, without any further communication from us, commence legal action against you to redress your unrestrained and unwarranted assault against our client’s hard earned image and reputation.
“We shall, in such circumstances, be demanding for damages in the sum of N5 billion.”