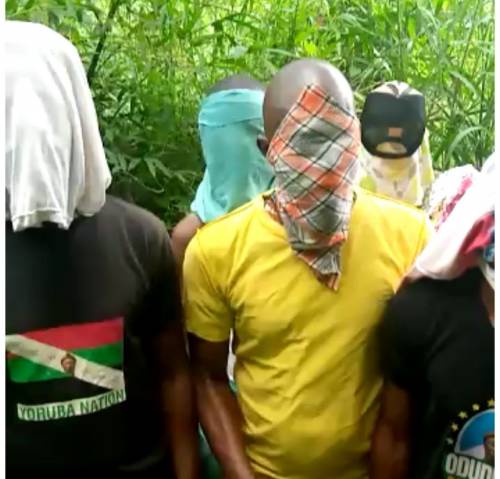 While Sunday Adeyemo Igboho is languishing in Benin republic jail after stirring a secessionist agitation in the southwest, and decided to flee, another separatist leader has put himself forward.

But this champion, named Sunday Oyo, may lack the pluck of Sunday Igboho.

Masked and branded Yoruba Nation in a video Sahara Reporters firt obtained, the Sunday Oyo gang issued a 30-day ultimatum to Fulani and Hausa people to leave all parts of Yorubaland, starting from Sept 23.

“We are using this opportunity to warn President Muhammadu Buhari that he should immediately evacuate all Fulanis and Hausas from Yorubaland,” Sunday Oyo said.

“We don’t want to have a relationship with you, let everyone go their separate ways. The torture is too much, let’s have our nation, and you have your nation, and be careful or else…

“We give you 30 days to leave Yorubaland generally. You have arrested Sunday Igboho, I am Sunday Oyo, we will deal with you. After 30 days, whatever your experience is, you should accept it as your fate.”

Government across the south of Nigeria have taken a position against secession, backed a united, but restructured Nigeria.

They also enacted anti-pen grazing law for Fulani herders whose crisis with farmer has led to bloodshed across the nation.