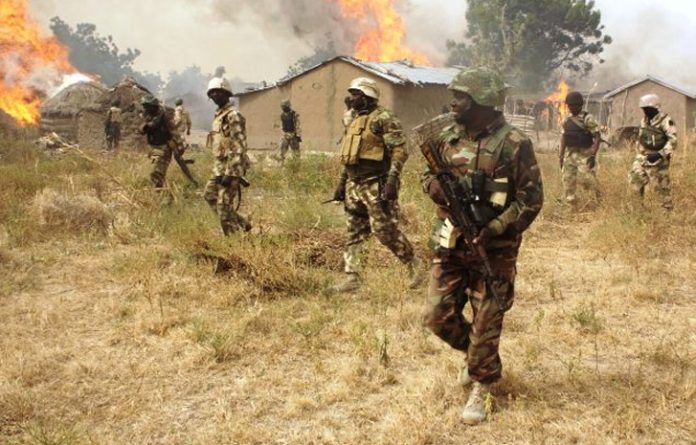 The Defence Headquarters says the troops of Operation Hadin Kai have arrested one Mohammed Maki, who claims to be a Chadian, coordinating a kidnapping syndicate and terrorist groups in the north-eastern part of the country.

The Acting Director, Defence Media Operation, Brig.-Gen. Bernard Onyeuko, disclosed this while briefing newsmen on the military operations across the country between June 3 and June 16 on Thursday in Abuja.

Onyeuko said the troops conducted several raid operations, extensive air strikes, responded to distress calls as well as repelled and thwarted terrorists’ attacks in the region during the period.

He said that the Air Task Force conducted air strikes executed within Damboa on June 3, dislodging several terrorists and inflicted significant damages on their logistics facilities.

According to him, troops also repelled terrorists’ attacks on the town on the same day, where several fighters of the ISWAP sect, including one of their commanders named Umar Tela, were neutralised.

“Other locations where troops recorded significant results are Gujba in Yobe, Magumeri in Borno and Mubi in Adamawa where troops conducted raid operations on terrorists’ hideouts on June 4 and June 5.

“In the course of these operations within the period under review, several terrorists were neutralised, while some escaped with gunshot wounds.

“Large number of their gun trucks and other logistics facilities were also destroyed in the process.

“Troops operations also led to the arrest of some terrorists and kidnappers on June 5, including the leader of a notorious kidnapping syndicate in the North East Zone, named Mohammed Maki, who is a Chadian.

“Troops also recovered large caches of arms and ammunition, large quantities of petrol and kerosine in jerry cans in the course of the operations,” he said.

Onyeuko said that the troops’ superior operational engagements had continued to degrade the terrorists’ operational capabilities and deny them freedom of operation in the North East theatre of operation.

He said the troops had remained resolute to take decisive and adequate actions to further abate terrorists and bandits’ activities as well as other vices across the country.

According to him, the military high command also lauds the efforts of the troops for their resilience and unrelenting commitment.

“We wish to encourage the public to support our efforts by providing credible and timely information that will facilitate our proactive engagements,” he said.