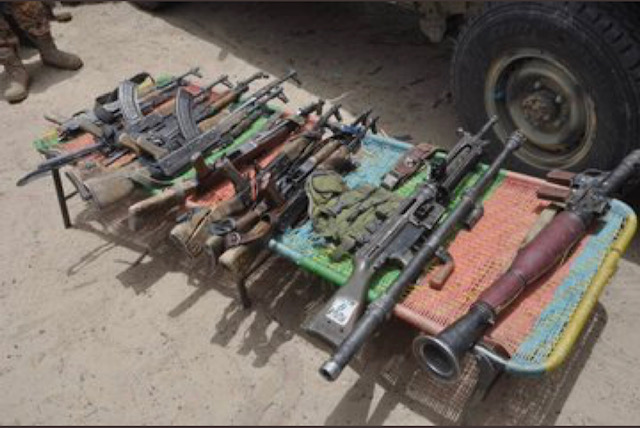 Operation  Yancin Tafki  on Thursday killed scores  of Boko Haran  terrorists during an encounter in Cross Kauwa  community in Borno State,  north east, Nigeria.
The  joint task force comprising  of troops troops from the Sect  2 multinational joint task force (Chad) engaged the terrorists for about one hour  on Friday
The exchange of gunfire with the multinational forces led to the death of over 39 members of the terrorist group. This was the number of dead bodies said to be counted within the scene after the gun battle. Many other dead bodies were said to be scattered in the bush.
ALSO READ: $2.1bn Oil fraud: EFCC gets Court order to arrest Dan Etete, others
Items recovered from the insurgents include two GTS cars, nine AK47 riffles, one HK21 and four   RPG tube with pictures attached.
About 20 soldiers were injured in the Chadian. Boko Haran attack and have been evacuated. by air to Maiduguri for medical treatment.
Visit of Chadian Chief of Defence 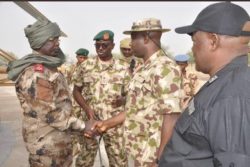 The Chadian Chief of Defence Staff, Gen.  Tahir Arda, with the Chadian Chief of Army Staff arrived Monguno on Thursday.  and visited Cross Kauwa  to assess the situation and address the Chadian troops
His visit boosted the morale of the troops who were inspired for more commitment.t
He departed Nigeria for Njamena, thereafter.
According to Wikipedia, Cross Kauwa is a town in the northeastern Nigerian state of Borno, east of the town of Kukawa. It is located within the Kukawa Local Government Area. The town is located along a road that runs from Baga to the east and to Kukawa to the west. Another road leads south to Monguno.
PV: 0