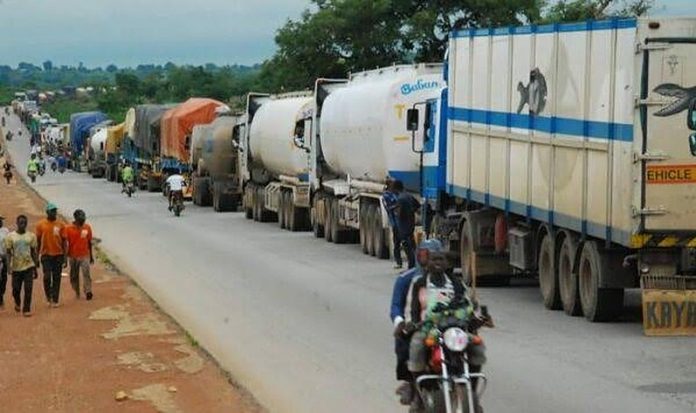 Articulated vehicle drivers on Friday blocked all roads in and out of Bida town in Niger, causing road users travelling to Abuja, Lagos and other destinations to suspend their journeys as there was no alternative route.

The drivers used their vehicles to block the roads while protesting the blockage of Bida/Minna road by the Niger State Government; due to ongoing rehabilitation work on the road.

They insisted that until the state government reopened Bida/Minna, road they would not remove their vehicles.

Malam Abdullahi Mohammed, a tanker driver told the Newsmen that blocking the road by the state government for the past six months had worsened the already bad Bida/Lapai/Lambata road which they had used as alternative route.

“The Bida/Lapai/Lambata road is completely bad right now. We sleep there for two or three days before getting to our destinations,” he said.s

As at the time of filing this report, several travellers have been trapped for over hours without any solution.

Also, Mr Ismail Abdulaziz, an editorial member of staff of NAN traveling to Ilorin said he had spent over two hours in Bida, owing to the protest.

Mr Iliya Garba, a resident of Bida also said that there was no way in and out of Bida town.

Garba said that aside the main roads in Bida, some streets were also blocked by the residents due to influx of vehicles trying to maneuver their ways.

When contacted, Alhaji Abdullahi Imam, Permanent Secretary in the state Ministry of Works, confirmed the situation.

He said the drivers were protesting the bad condition of the Bida-Agaie-Lapai-Lambata road which happened to be a federal road.

“They want to be allowed to pass through Bida-Minna road. This is not possible as it is closed to heavy vehicles, being under construction.

“The Niger State Ministry of Works has made contacts with the Federal Ministries of Works and Housing, Ministry of Transport and other traffic control agencies in the state to engage the transport unions and they are currently doing so,” he said.