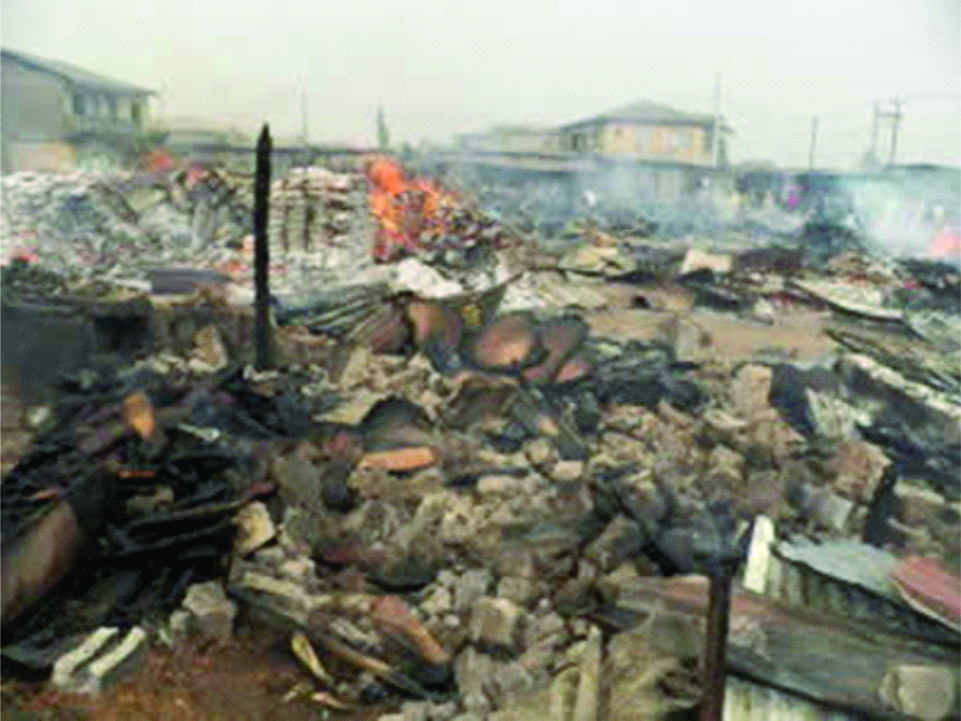 Tragedy struck early hours of today at the popular Station Fruits Market located in Kaduna South Local Government Area of the state, when inferno gutted property worth millions of Naira and leaving two people feared dead while others sustained injuries.

An witness reveals that the fire was attributed to electrical surge in the market which started around 12.45am this morning, destroying more than 800 make shift shops.
One of the eye witnesses, Murkhtar Abdulla who resides at the popular Railway Down Quarters, close to the Station Market said they started noticing smoke coming from a shop in Lane 7 of the market and by the time they rushed there, the whole shop was gutted in the inferno spreading fast to other adjacent and opposite shops.
Fire Service men from Nigeria Brewery Plc, Kaduna Refining and Petrochemical Company, KRPC, Dialogue Fire Service and State Fire Service rushed down to the scene and it took them hours before they can bring the fire under control.
The Station Market which is popular for selling of fruits and food items has witnessed two fire incidents in the last three years.  Some of the traders attributed these frequent fire incidents to the make shift shops built with zinc and woods which can easily be consumed by fire.
A trader in the market, Ifeanyi Ogochukwu said the fire incident would have been averted if proper structures have been allowed to put in place in the Market.
According to him, the leadership of the market approached the last administration in the state for permission to build permanent structures made of blocks and iron on the site when their shops were gutted by fire in 2014.
He said the government did not give them the said permission so they have to make do with another set of make shift shops.
Traders who are seen in groups’ discussing the incident expressed agony over their loss which some of them said they could not be accounted for.
A woman, Mary Audu who deals in rice and beans said her suppliers just supplied her with bags of rice and beans two days ago, and all have been consumed by the fire.
Two people who were said to be sleeping in one of the shops were said to have been burnt to dead in the inferno, while some who sustained injuries were rushed to St. Gerard Catholic Hospital, Kakuri for medical attention.
However, security personnel has been drafted to the scene to forestall peace and order, while traders were still seen counting their losses.
Some of them said they don’t know where to start from as their source of livelihood has been consumed in the fire.  They therefore called on the Kaduna State Government to come to their rescue.
Share this on WhatsApp