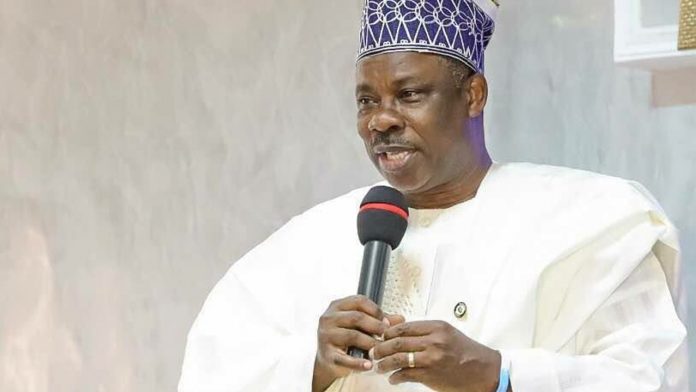 The leadership of the Nigeria Labour Congress (NLC) has said it must rescue Ogun workers from some alleged anti-labour practices of the state governor, Mr Ibikunle Amosun.

Mr Ayuba Wabba, the NLC President made the position of the congress known in a statement in Abuja.

There has been a confrontation between the state governor and the leadership of NLC over non-payment of workers’ salaries and arrears and the recent sack of the NLC state chairman by the governor.

The NLC leadership also accused Amosun of non-remittance of statutory deductions from workers’ salaries and his refusal to pay gratuities of retired state and local government workers since 2013.

Wabba said NLC was prepared for a showdown with the governor if attempts were made to “disgrace the NLC” during its rescheduled March 5, protest in the state, as reportedly threatened by him.

He said the decision to ‘confront and tackle’ Amosun had already been taken by the NLC at its 12th National Delegates Conference and that there was no going back on it.

“This was reported by Premium Times on 1st March 2019 and other platforms. Our Position is that The Nigeria Labour Congress has taken note of the threat by Governor Ibikunle Amosun.

“But we want to assure him that his threats will not deter us from defending the interest of workers in Ogun State whose rights he has been trampling upon.

” This is especially on the following issues: the non-remittance of statutory deductions from workers’ salaries for pensions, cooperative, ileya, Christmas etc. over a period of one hundred and five (105) months,” he said.

He said that Amosun had refused to pay salary arrears of workers at the Tai Solarin College of Education, according to him, which has accumulated for the past ten years and now grosses to a financial liability of about N9 billion.

“To make matters worse, Governor Amosun sacked the Chairman of the Nigeria Labour Congress from his employment for standing firm in the defence of the rights of workers in Ogun State.

“The issues we have highlighted are too grievous to be swept under the carpet, therefore, the decision of the 12th National Delegates Conference of the NLC to confront and engage Governor Amosun will be carried out to the letter on Tuesday, March 5, 2019.

“We are not unmindful of the fact that even Amosun’s political party has complained of his penchant to violently disgrace other spheres of leadership outside his control and sometimes beyond him.

” Our confidence stems from the protection and guarantees provided by Section 40 of the 1999 Constitution, which gives workers and indeed all Nigerians the freedom to peaceful assembly and protest,”he said.

While insiting on the scheduled protest, Wabba added that “”All that the law requires us to do is to inform the police and relevant security agencies.

“This we have done. We are ready to peacefully protest the grievous mistreatment by our workers in the hands of Governor Ibikunle Amosun on 5th March 2019.

“We want to warn Governor Amosun that we will hold him personally responsible for any harm that comes to any worker during our protest on March 5, 2019.

“We want to remind Governor Amosun that he has already trampled workers on the ground and those who are down need fear no fall.

“We wish to alert our security agencies to Governor Amosun’s resort to violent threats.

“We assure him that his immunity cover will soon be removed and he must be ready to answer for his crimes against workers.

“The NLC can assure Ibikunle Amosun that we will continue to engage him even after he would have been sworn in as a Senator in Abuja.

“We wish to state that we unequivocally stand with the press statement recently released by our state council on this issue.

“We urge all our state councils especially those from the contiguous states to Ogun State – Lagos, Oyo, Osun states who are already fully mobilised for the protest not to be sacred one bit by the threats by Governor Ibikunle Amosun. We had dared and won worse tyrants,” Wabba said.