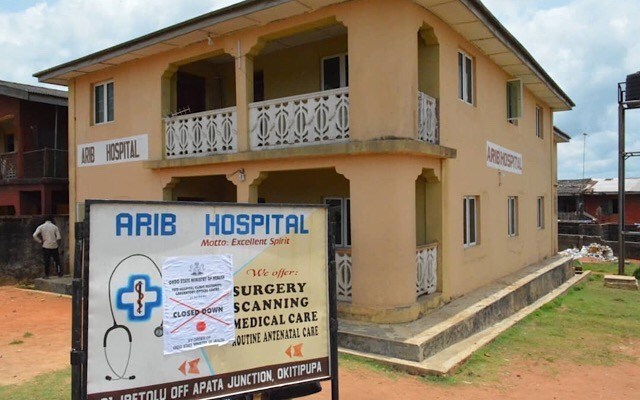 The Ondo State Government on Thursday closed down an alleged illegal hospital called Arib Hospital in Okitipupa, Okitipupa Local Area of the state.

Dipo Durojaye, the Permanent Secretary of the Ministry of Health, said the hospital was training about 52 auxiliary nurses, not allowed by law.

Mr Durojaye added that other offences allegedly committed by the hospital were running medical services without following laid down regulations and non registration of the hospital with the state Ministry of Health.

He said it would not be business as usual in the state health sector as government would descend heavily on quacks and those opening hospitals indiscriminately.

The permanent secretary promised that any private health facility training health personnel would be sanctioned as the government would not allow the life of the people to be endangered.

He decried so much ‘wrongdoings’ in the health sector, saying that the government was poised to sanitise the sector.

Mr Durojaye also warned patent medicine stores operating as hospitals and treating patients to desist from such act which could pose great threat to the well-being of the society or face the wrath of the law.

The Director, Hospital Services in the ministry, Richard Adesoji, said quacks were dangerous to the health sector as they were not properly trained.

Mr Adesoji said they could not make correct diagnosis and usually jumped to conclusions, a situation that had caused unnecessary mortality in the country.

Mr Adesoji said in spite of the enormous negative effects quacks had on the society, people still ignorantly patronised them.

He disclosed that hospitals that could not employ qualified nurses, could use the Community Health Extension Workers ( CHEWS) as agreed at the National Council on Health.

The Director Nursing Services of the ministry, Alice Ogundele, said it was alarming that some hospitals in that locality had more than 50 nurses in training, when even some accredited Schools of Nursing and Midwifery were only allowed to admit 50 or less.

Ms Ogundele said the trend was dangerous to the nursing profession, as it would not allow qualified nurses get jobs.

She said quacks had become a source of cheap labour just wasting their future.

She said the quacks, called auxiliary nurses, constituted danger to humanity as they were half baked, did not know the rationale behind their actions and perpetrated several wrong doings in the health sector.