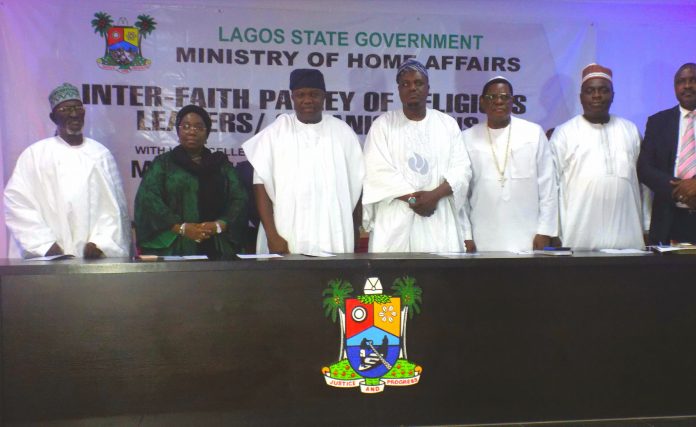 Lagos state Governor, Mr. Akinwunmi Ambode has extolled the contributions of religious groups in the State to the development of the State, describing the spiritual leaders as great partners and pillars in the effort to bring greater progress to the State and increased prosperity to its citizens.

Ambode made this known when he met all religious leaders at an Inter-Faith Parley held at Lagos House, Ikeja, on Tuesday, December 12, 2017.

He commended the religious leaders for their roles in ensuring the sustainability and promoting peaceful coexistence and religious tolerance in the state, which had greatly aided government’s efforts in the delivery of services and dividends of democracy to the people especially those at the grassroots.

He maintained that the gathering was sort of Thanksgiving for the mercy and blessing of God that has created atmosphere of harmony,making it possible to bring greater gains to the people and to appreciate the spiritual leaders for their roles in ensuring peace in Lagos and to fine-tune existing strategies and harmonious relationship already prevailing among Lagosians.

“I thank you all for your ceaseless prayers and for all the spiritual efforts through the power of the pulpits and for sensitizing your followers to follow the path of civility and do that which is lawful. The commendations and awards the State government received from the National Hajj Commission and the Christian Conscience Group are all testimonial to your efforts and conduct as very understanding and tolerant believers.”

The Governor informed that it would not have been possible for anybody to successfully deliver in vast and complex mega city as Lagos without special spiritual touch, while thanking God for the inspiration and spiritual direction that has giving him the bigger space to touch many lives and advance humanity.

Ambode reiterated that spiritual leaders should continue to pray for the State as the achievements of his administration in the past two years was largely due to the harmonious living among all the religious bodies in the State.

“What I know is that regardless of how intellectually sound a leader might be, if spiritual teamwork needed to create a platform for the brain to work is in disarray, there is nothing that can be achieved.”

ALSO SEE: One dead, many others injured as cult groups clash in Ibadan

The Commissioner for Home Affairs, Dr. AbdulHakeem AbduLateef commended the choice of Mr. Akinwunmi Ambode as the Governor of Lagos State, saying that the clamour for a Christian governor during the electioneering period in 2015 was a justified request.

“I make bold to say that the Governor did not disappoint the Christian and Muslim faithful who vigorously requested for a Christian Governor. Governor Ambode, he said, has made both Christians and Muslims very proud.

Rev. Dr. Kehinde Babarinde of Baptist Conference Lagos Central in a lecture titled “the Role of Religious Leaders in Nation Building” extolled the good efforts of the Governor, describing the Governor’s achievement as really life touching and very impactful to Lagosian.

While giving some recommendations during his message, the Head of Religious and Peace Studies, Lagos state University, Prof. AbdulLateef Adetona called on the State government to ensure the teaching of religious studies in schools in order to instill good morals in the minds of school children at their formative years, while calling on leaders of religious groups to see themselves as partners in building a sustainable and enviable Lagos.

Prof. Adetona, went further to appreciate Governor Ambode for decentralizing NIREC to all the Local government and local council development areas of the State, saying that the move was a right one in the right direction. 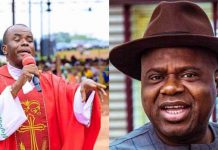