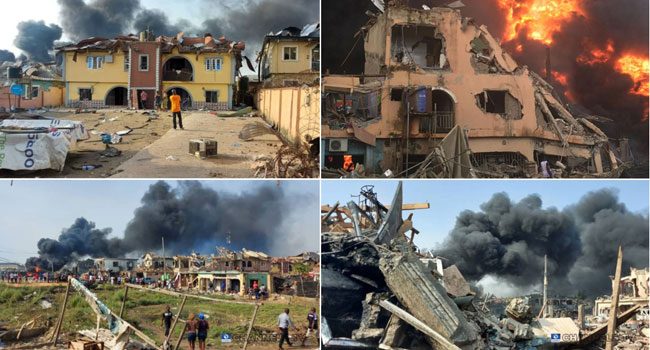 The incident which occurred on Sunday 15 March left more than 20 dead and several injured with properties worth billions of naira destroyed.

The two corporate giants announced the donation when their delegation visited the Governor of Lagos State, Babajide Sanwo-Olu, to commiserate with him and the state on the incident.

The two corporate bodies which came in turns and led by Emmanuel Ikazoboh for Dangote Cement and Ebenezer Onyeagwu, Group Managing Director of Zenith Bank, met the governor at the State House, Marina,

The two organisations individually announced donation of N100million each to the N2billion Fund earlier launched by the state government.

“Ikazoboh announced the donation of N100million worth of cement for reconstruction of the damaged part of Abule Ado, which was affected by the explosion, while Zenith Bank made a donation of the same amount for the care of victims of the disaster, even as he pledged for more in the course of time.

“Ikazoboh said that the visit to the governor was to introduce the new management of the company and to commiserate with him on the sad incident that took place at Abule Ado.

“He stated that the management had directed that N100million worth of cement be donated towards reconstruction of the explosion site”, the release revealed.

On his part, Group Managing Director and Chief Executive Officer of Zenith Bank, Onyeagwu, told the Governor, that he was there to reassure him of the bank’s support in taking care of the people affected by the explosion as well as commiserate with the state government on the incident.

He announced a donation of N100m.

“Zenith Bank is making an immediate donation of N100million. We hope it would ameliorate the suffering of the victims. We pray God would console the families of those who died during the disaster”, Onyeagwu said.

Governor Sanwo-Olu expressed appreciation on behalf of the state for the gestures and thanked President Muhammadu Buhari for granting him audience in the wake of the disaster.

He assured all that the relief fund would be judiciously used.