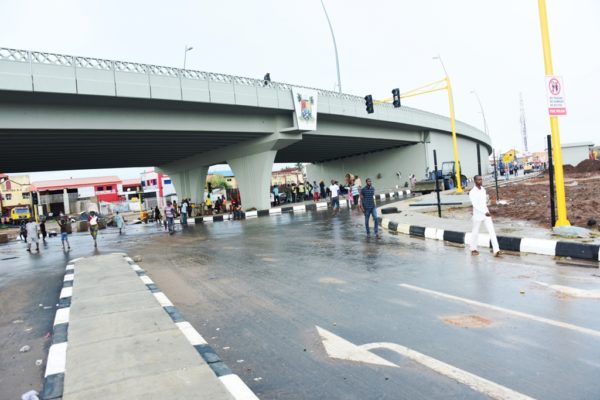 In fulfillment of the pledge by Governor Akinwunmi Ambode of Lagos State to repair and upgrade all the inner roads damaged as a result of the construction of Jubilee Bridge in Abule-Egba, the State Government has completed the rehabilitation of popular Charity Road and other major roads in the area.

Governor Ambode had, during the inauguration of the bridge in May, assured that all the adjoining roads in the corridor disrupted through traffic diversion while the construction of the bridge lasted, would not only be rehabilitated but also upgraded.

The dual carriage Charity Road has since been completed with the removal and relaying of asphalt on both sides.

Speaking on the development, a resident of the area, Mrs Abidemi Oyekunle said the rehabilitation of Charity Road has brought relief and succor to people who live in the area and ply the route.

Oyekunle, who lives in Beckley Estate in the axis, said the State Government and the Governor in particular deserved commendation for their commitment to truly transform the area.

Another resident, Mr Tunde Akanbi said there was no doubt about the appreciable progress which the axis had witnessed since the coming on board of the present administration in the State.

He said though the rehabilitation of Charity Road took longer time to complete, but it was worth it judging by the quality of work done on the road.

“The quality of work done here is good though it took longer time to complete but there is no doubt about the fact that this axis has been transformed and the Governor is still going on with many projects in this axis.

“I want to thank him (Ambode) for that. But like Oliver twist, I will also urge him to consider other roads damaged in this axis like Jibowu Road, Ahmadiyya Road, Sanni Balogun Road and Adewunmi Adu Road,” Akanbi said.

The Abule-Egba corridor is a strategic route for commercial and social activities which was hitherto riddled by heavy traffic gridlock, a development which necessitated the decision of Governor Ambode’s administration to redesign the traffic flow chart of the axis to ensure better connectivity between Lagos and Ogun States.

Aside the construction of Jubilee Bridge, the State Government is also constructing Bus Rapid Transit (BRT) lane from Abule Egba to Oshodi, while the second phase connecting Abule Egba to Sango Ota Toll Gate is planned for the future.