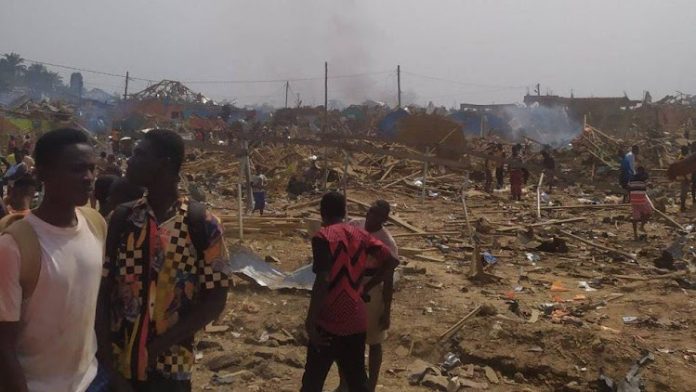 Share this on WhatsApp
Spread the love
At least 17 people were killed and 59 injured Thursday in a devastating explosion in a western Ghana town after a truck carrying explosives intended for a mine collided with a motorcycle, the government said.
Footage verified by AFP showed locals rushing towards a raging fire and rising plumes of black smoke to inspect the damage, while rescue workers waded through the rubble to find survivors caught in the devastation and retrieve lifeless bodies.
“A total of 17 people have unfortunately been confirmed dead, and 59 injured people have been rescued,” Information Minister Kojo Oppong Nkrumah said in a statement released overnight.
The minister said initial signs point to “an accident involving a truck transporting explosive materials for a mining company, a motorcycle and a third vehicle” which took place near an electrical transformer.

Ghanaian President Nana Akufo-Addo called it a “truly sad, unfortunate and tragic incident” and expressed “deep condolences to the families of the deceased”.

Officials and eyewitnesses described a scene of desolation against the sea of buildings collapsed or impaired in the carnage.

“It’s a black Thursday. So far 500 houses have been affected. Some have been razed down completely by the explosion while others have developed cracks,” Sedzi Sadzi Amedonu, Deputy Coordinator of the National Disaster Management Organization, told AFP.

Abena Mintah, who witnessed the blast, told local media the driver of the truck dropped down from his hatch, shouting at those nearby to warn them away from the flaming vehicle.

“Within a few minutes we heard a loud bang. I felt dizzy and fell in the bush. I managed to get up and saw a few dismembered bodies on the street,” Mintah said.

The government said those in critical condition would be moved to hospitals in Accra and police asked surrounding villages to open their schools and churches to accommodate any additional casualties.

A team of police and army explosion experts were deployed to “avoid a second explosion” and put in place security measures after the blast, the government said in a press release.

Dr Isaac Dasmani, chief executive of the Prestea Huni-Valley municipality where the explosion occurred, told local media “the whole community is gone” after the blast.

“All of the roofs have been ripped off, some of the buildings have collapsed. Some were in their rooms, and were trapped. Some of them unfortunately, before we were able to rescue them, were already gone,” he told Ghana’s TV3 broadcaster.

Authorities have created an access route to the scene and were working to open roads on Friday to ease traffic around the blast site, he said.

Ghana has been rocked by several deadly explosions caused by fuel accidents in recent years.

Ghana’s capital was the scene of a similar fire and explosion in June 2015, when more than 150 people died as they sought shelter from seasonal rains and flooding at a petrol station. The blaze was believed to have spread by fuel on the floodwater.

Deadly accidents linked to the mining sector are also frequent in Ghana, Africa’s second largest gold producer after South Africa, but they are mostly caused by the collapse of mines, often illegal ones.

In June, at least nine people died in the collapse of an illegal mine in northern Ghana. 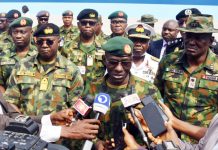 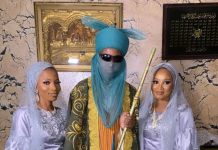 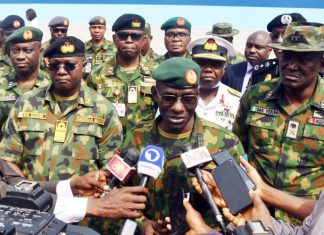