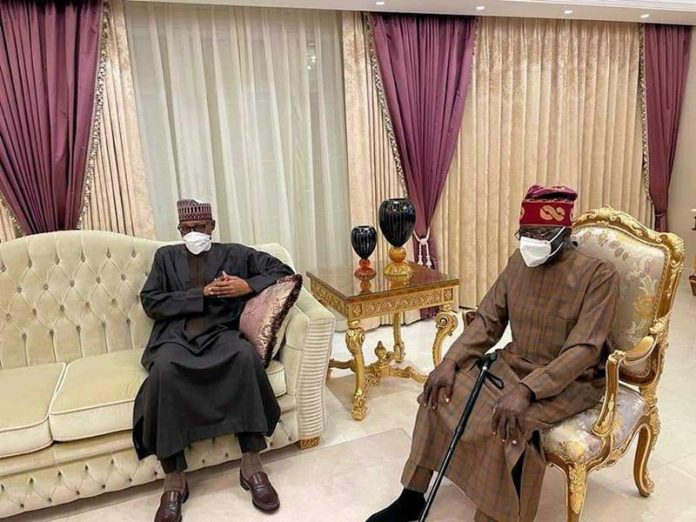 Like him or hate him, here is another thought provoking piece from Mr Sanusi Muhammed. You may agree or disagree with him but it seems his thoughts are well written, mostly sincere and logical. Please read and draw your own conclusion.

The godfather of Lagos politics, Asiwaju Bola Ahmed Tinubu, in 2015 led the South-West into an alliance with the North to birth the All Progressive Alliance (APC). His decision, evidently, was informed by the expectation that the two geopolitical regions will share power, invariably to the exclusion of the Eastern bloc. And ultimately that he, or the South-West, will take power by the time the North completes two terms in 2023. But it has proved to be a miscalculation.

Certainly, power play is about conspiracies and alliances. Tinubu is well within his right to do what he thought would best advance his political interest and that of his region. However, in backing President Muhammadu Buhari, he cut his nose to spite his face.

It may not have seemed obvious to many, but once Buhari took power in 2015, Tinubu’s political career was in jeopardy.

To navigate the presidency without bruises, the best Tinubu could have done was to retire from active politics and assume the role of an elder statesman. He did not, he stayed on, wanting to be president and pushing hard to remain at the centre of political discourse. But power is jealous, and if there is any holder of the highest office in the land who would tolerate a co-president, it is not Buhari. Things are beginning to unravel, fast.

Without Tinubu, and by extension the South-West, Buhari could not have been president today. This is one fact that president’s men who now dominate the political space and brook no opposition will hate to admit, but it remains true, regardless.

But being essentially Buhari’s kingmaker, it was political naivety to decide to hang around in the expectation that he would share power. The old Machiavellian advice is that the prince must first destroy the one who made him king. Reason? Because he could decide tomorrow to make another king.

Writing in The Prince, the legendary Niccolo Machiavelli noted “…he who is the cause of another becoming powerful is ruined; because that predominancy has been brought about by astuteness or else by force, and both are distrusted by him who has been raised to power.”

Of course, it should have been obvious that, in helping to make Buhari president, Tinubu was jeopardizing his political career and plunging the South-West, and by extension Southern Nigeria, into political slavery whose only parallel in the country’s political history is the late Emeka Ojukwu leading the Igbo to war in 1967.

With respect to the Biafra War, blaming Ojukwu for embarking on it could earn one exile in the Igbo country. But if truth be told, the war was avoidable and could have been avoided if Ojukwu had not been too stiff to listen to the likes of Zik and other intellectuals who understood better, international politics and diplomacy. This is not to say, nonetheless, that Ojukwu was not sufficiently provoked by the killings of the Igbo in the North in the aftermath of the July 1966 revenge coup that threw up Yakubu Gowon as head of state, and indeed the actions – or lack of it – of the Gowon-led federal side. Regardless, it was still in his hands to accept to fight or toe the path of diplomacy which, given the circumstances, was the best option and the only way to win international support for his secession quest. In the event, he went to war and only succeeded in sacrificing more Igbo lives and weakening the Igbo politically.

The consequence of that weakening is that it provided fertile ground for the emergence of hegemonic Northern power. The imbalance so created is largely responsible for the crisis of Nigeria’s national identity. One mistake many Nigerians, particularly in the South, make is the assumption that the country is already formed and settled as a secular state. It’s not the case. There is the ever present quest to define the country right, of course, from the 1804 jihad.

Colonial rule put a stop to it, then in the post-war years, the Middle Belt soldiers who dominated the army acted as a wedge. Tinubu’s alliance with Buhari has served to reenact that quest. Buhari is now, apparently, out to define the country. The Jagaban’s political miscalculation could yet prove too costly.

The old generals who, I reckon, understand this are already raising the alarm. But of course, the horde of naive, ignorant online crowd of crumb eaters are blurring the resistance line.

As it concerns the 2023 presidency, it should be clear to anyone with a functioning brain that President Buhari’s North has no intention of relinquishing power to the South-West or any zone for that matter. What many may not have realised, however, is that for the next three decades at least, if ever, and should Nigeria remain one, power will not leave the North. But in projecting, one must always leave space for the law of unintended consequences and the God factor.

But given Buhari’s antecedents, was there any grounds for the South-West, particularly, to have given him benefit of the doubt in 2015? Absolutely none in my reckoning. However, it would appear that emotion rather than sound political calculation informed their support for Buhari in 2015. It was, perhaps, more to spite the East than love for Buhari. I had been amazed when, in the heat of the moment in 2015, before the election, the news editor of my then media platform branded a fellow reporter who didn’t buy into the Buhari presidential project a “bloody b*stard who is following the Igbo people to betray Yoruba by supporting Jonathan.”

In the lead up to the 2019 polls, I had on several occasions engaged my landlord – a backer of Buhari’s second term project who loves to discuss politics with me – on who between Atiku Abubakar and the President would make a better leader. My insistence was, of course, that Atiku would. After we exhausted all manner of issues he raised against the former vice president, he said finally that he would still back Buhari because Atiku was an “Omo Igbo project” and that “after Buhari, Yoruba will take power and after Yoruba, Hausa will take power again.” According to him, “we will be rotating it like that, Igbo people will never smell that place.” I had more of pity for his ignorance.

When in 2003, Buhari joined presidential race, he did so, apparently, to stop the then president, Olusegun Obasanjo. Not because Obasanjo had performed badly as president, having taken power with the return of democracy in 1999, but because Buhari and the section of the North he represented believed that power had to return to the region.

In settling for Obasanjo in 1998/99, the intention of the Northern military class was for him to do four years as compensation for MKO Abiola – the Yoruba had become uncontrollably agitated – and hand power back to the North. But not long after Obasanjo took power, it became clear that he was never going to leave it for anybody. This realisation led to agitations; criticisms of the Obasanjo government was swift in the north, the climax of which was the Sharia crisis of 2000. To take power, however, the anti-Obasanjo forces in the North knew that ultimately, it was about going to challenge him at the polls. Buhari emerged as the arrow head of that challenge. And through speeches and actions that appealed to regional sentiments, he built a cult following that saw him win elections convincingly in the North right from 2003.

Until 2014/15, Buhari was a regional hero who believed he could become president by winning elections in the North and never thought seriously about campaigning in the South. However, in 2014/15, the Tinubu led South-West gave him an undeserved national platform, and through heavy media propaganda, dressed him in the robe of a born again democrat. But old habits die hard.
Once in power, Buhari did not hesitate to take off the borrowed garb of a nationalist and democrat to put on his original robe of sectionalism. Right from his first set of appointments, he made clear his intentions. And as it stands, he has completely consolidated power in the hands of the North.
Buhari is an idealogue; usually idealogues are very resolute and persistent people. Say what you will, he is doubling down on nepotism. Shout ‘Fulanisation’ or ‘Islamisation’ all you will, he will only look for a hate speech bill or social media bill to shut you up rather than re-examine his ‘hate’ policies.

Possibly, when Buhari is done with the country – if he has his way – no Southerner will, on the basis of an election, ever become president except at the behest of the North. By suppressing votes in the South and inflating figures in the North, the administration is only trying to establish a pattern – a dangerous pattern which supporters of his party in the South are evidently too blind to see.

It is clear to the discerning where the president is headed. But the question is whether he would succeed. I had pointed out elsewhere that the project would fail, ultimately, because Nigerians are too many to be subjugated.

It would seem, from the actions of those controlling the levers of power, that there is an attempt to precipitate a national crisis with a view to using force to take over the country. But, of course, this is a country of 200 million people. The advantage those who have a “legitimate” right to bear arms are enjoying at the moment would be lost if there is a total breakdown of law and order. And the country would break into fractions controlled by warlords, such that it would take a miracle to have it again as one stable country for anyone to control.