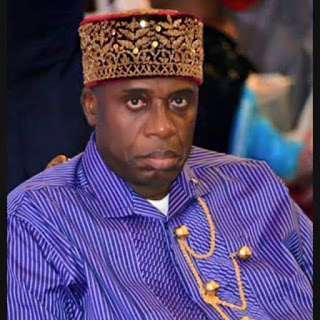 Minister of Transportation Rotimi Amaechi was all tears on weekend as he assured Rivers citizens that those involved in the January first killing will face the wrath of the law.
Amaechi said this in Omoku, the headquarters of Ogba/Egbema/Ndoni Local Government Area of Rivers State on Saturday, when he was on condolence visits to the families of the dead victims.
“I was at the hospital to see a little boy that was shot, and his father and mother killed. How do you want that little boy to live? How would he cope in life? They must pay for their actions,” he said.
The state’s former governor also blamed the Nyesom Wike-led administration of failing to protect the lives of Rivers people.
“The first responsibility of a leader is to keep his subjects alive. The reason why the constitution puts every governor on oath, to swear that you will protect lives and property is because if there are no lives, there will be nobody to lead,” a statement from his media office said.
“If there is anybody on earth that said that I have met with him as a cultist to take lives, let him come forward. If there is anybody on earth that will tell you that I have sat with him in a meeting and we planned to go and kill people to win election, let the person come forward.
ALSO SEE: Zimbabwe’s first billionaire is more than what you see
“Let me tell you why I will not do such; it is not because I’m afraid of anybody, it is because I’m afraid of God.
“I doubt that God was happy the day they killed 23 persons in Omoku. I doubt that God was happy the day they killed people in Omerelu or at Egbeda or at Andoni or at Ogbunabali or wherever.”
Earlier, the President-General of the Ikwuerre Youth Movement honouring him same day, had said that the reception was organised to honour the Transportation minister, fondly called the Lion of the Niger Delta.
Azubuike Nwanjoku said that Rivers State should be saved from crime and cultism and appealed to Amaechi to take their plea to President Muhammadu Buhari, adding that they want to live and work in peace in Rivers State.
PV: 0