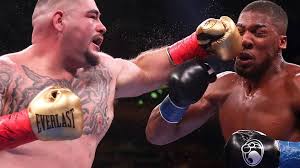 Douglas has predicted that the Mexican-American will get the better of Joshua for a second time ,because the Brit cannot take a shot.

Joshua’s shock defeat at the hands of Ruiz in June is considered the greatest boxing upset since Douglas knocked out Tyson in 1990.

Despite coming in as a last minute replacement for the drug-shamed Jarrel Miller, and being priced at odds of 10-1, Ruiz sent shockwaves rippling through the sport when he climbed off the canvas and knocked Joshua down four times before stopping him in round seven.

The new unified heavyweight champion will defend his titles in a Saudi Arabia rematch with AJ on December 7, which many are finding difficult to call.

But Douglas is backing his fellow underdog to get the job done again in the ‘Clash on the Dunes,’ insisting he only needs to find ‘the magic button’ by testing Joshua’s chin.

Douglas, though, believes the California fighter will be equally as hungry to retain his titles. “I think he’s hungry ‘cos he’s enjoying the fact of being the champion,” he added.

“He likes the status. He wants to always be walking around like the man, which he always will be, but he wants to maintain being ‘the man’ the man.

“‘I have got the belts, you’re still chasing me’ and I think Ruiz is that type of guy.“So, he’s focused, he’s fighting the same guy again and really the pressures gonna be on Joshua.”

Share this on WhatsApp
Related Topics:Andy RuizAnthony Joshua
Up Next