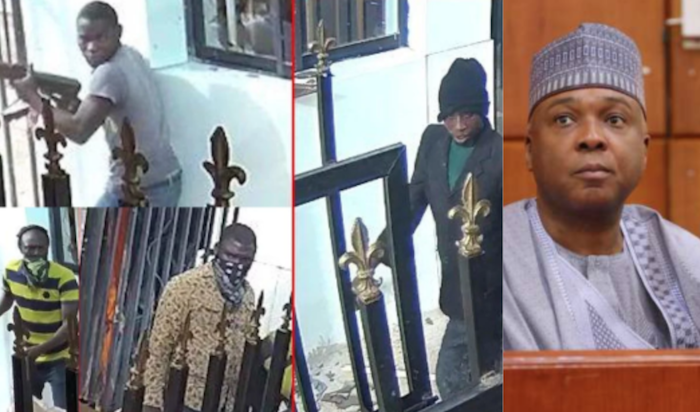 The ruling All Progressives Congress (APC) appears unrelenting in tis desperation to get Senate President Bukola Saraki out of office since his defection the opposition Peoples Democratic Party (PDP). All institutions of governance at the behest of the ruling APC are being deployed to fight the Senate President. The new interpretation of the interim report the Ministry of Justice previously sent to the Inspector General of Police which specified particular issues to be established before the senate president is linked to the Offa robbery which the Police claimed that certain suspects under investigation revealed is widely being considered a fresh plot by the ruling party to nail Saraki. Many had thought that the statement from the Justice Minister had exonerated the senate president from the case.

National Daily gathered that the Minister of Justice and Attorney-General of the Federation (AGF), Abubakar Malami, the Nigeria Police Force (NPF) and the Inspector-General of Police (IGP), Ibrahim Idris, on Friday, emphasized that the Senate President Saraki has not been cleared of his alleged complicity in the Offa robbery.

In separate counter affidavits in response to a fundamental rights enforcement suit filed by some 10 individuals, who claimed to be acting for the Senate President, the AGF, NPF and IGP had contended that there was nowhere Saraki was cleared by the Director of Public Prosecution (DPP) in the interim report of investigation submitted to the Police, as claimed.

They maintained that the DPP rather, having analysed the interim report of investigation by the Police, suggested areas of further investigation as regard claims by some of those being held over the crime, particularly, as it relates to the source of the weapons used and where the operation was plotted.

The AGF, the IGP and the NPF noted that pursuant to the advice by the DPP, further investigation has been conducted, following which a more detailed investigation report has since been submitted to the DPP for his further opinion.

They declared that it was premature for anyone to claim that Saraki had been exonerated as “investigation is still ongoing on the case”. They refuted the allegation that the questioning of the senate president on the Offa bank robbery was political and intended to blackmail him and dent his reputation.

They noted that the information linking Saraki to the bank robbery was provided by some suspects arrested over the robbery incidence, who, according to the Police and AGF, claimed to be political thugs of the Senate President.

National Daily gathered that the 10 applicants seeking fundamental rights enforcement include: Anthony Onukaogu, Lawrence Umudu, Bamidele Ojo, Ikenga Imo Ugochinyere, Ogechi Duruaku, Veronica Onoja, Chidiebere Achebe, Chika Onyiorah, Chigozie Eburuo and Patrick Uzim, claimed in the suit, that the decision of the Police to question Saraki in relation to the robbery was instigated by his political enemies; intended to blackmail him and dent the Senate President’s reputation.

The suit is pending before Justice M. A. Nasir of the High Court of the Federal Capital Territory (FCT), Jabi, Abuja.

The respondents, AGF, NPF and the IGP, filing separate counter-affidavits, also filed motions and notices of objection, challenging the applicants’ locus standi, the court’s jurisdiction and the propriety of court’s interim order of injunction, made on August 8, 2018, by Justice Nasir, restraining the respondents from further inviting Saraki in relation to investigation on the robbery case.

The AGF in his counter affidavit argued that contrary to the applicants’ claim in paragraph 23 of their affidavit, the Police interim investigation report on the Offa, Kwara State robbery and other alleged crimes, “as it affects Senator Bukola Saraki, revealed that further thorough investigation be made so as to ascertain whether the planning and the execution of the robbery attack of 5th April 2018 at Offa, Kwara State was carried out at his instance, knowledge or approval.

The IGP, in his counter affidavit, had given insight into what informed police’s decision to question Saraki over the robbery incident and why it was wrong for the Senate President to rush to conclusion based on the interim report submitted to the DPP by the Police.

Share this on WhatsApp
Related Topics:Offa robberySenate President Abubakar Bukola Saraki
Up Next