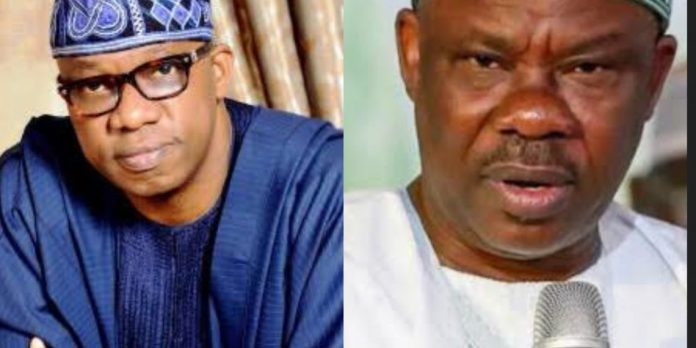 The cold war between loyalists of the Ogun state governor, Dapo Abiodun and that of his immediate predecessor in office, Ibikunle Amosun over who controls the All Progressives Congress structure in the state seems to be tilting towards Abiodun’s favour as his faction has the recognition of the party’s national leadership.

According to sources, his faction claimed that the national leadership of the party has directed it to inaugurate the ward congresses conducted by the group in the state.

Both Amosun and Abiodun groups had held parallel ward congresses in the state and submitted different results.

The appeal panel set up by the party during its visit received two petitions from the aggrieved members loyal to Amosun.

The panel, having listened to the loyalists of Amosun, who included two senators, Tolu Odebiyi and Lekan Mustapha  representing Ogun West  and Ogun East senatorial districts respectively, agreed that there were issues to resolve in the state

But Abiodun loyalists in a statement by the state APC Publicity Secretary, Caretaker Committee, Tunde Oladunjoye, said the party leadership had directed the caretaker committee to inaugurate the ward executive in preparation for the local government congress scheduled for Saturday.

Abiodun group in the statement made reference to a  statement signed by the  Secretary of the Caretaker/Extraordinary Convention Planning Committee (CECPC, Senator John Akpanudoedeh, directing  them  that “the conduct of nationwide Local Government Congresses should proceed accordingly by Saturday September 4th, 2021 as contained in the official timetable of activities released the party.

The governor, however, assured members that there would be no imposition of candidates in the local government congress.

Addressing a meeting of party stakeholders in Abeokuta on Wednesday, the governor was quoted as saying, “We should continue to be all inclusive. We must involve people who have joined us, as they intend to actualise their aspirations.”