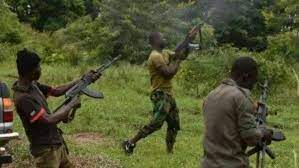 The Police Public Relations Officer (PPRO) of the Zamfara State Police Command, Superintendent of Police Mohammed Shehu, confirming the bandits onslaught on the security operatives, disclosed that one other police officer was critically injured and was receiving treatment at an undisclosed hospital.

The PPRO narrated that the security operatives were on patrol in the community when the bandits ambushed and killed five officers.

SP Shehu noted that the bandits struck in the aftermath of the termination of an unspecified number of bandits who blocked the Bakura – Sokoto road on Sunday afternoon.

The PPRO added that the State Police Command had sent a reinforcement to trace the bandits who flew into the forest; revealing that six rifles snatched from the police were recovered from the bandits after hours of gun battle.