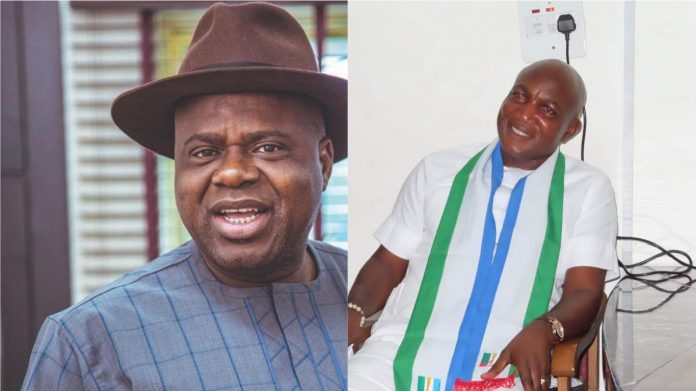 It happening so soon that the unfortunate governorship candidate of the All Progressives Congress (APC), David Lyon, who was stripped of his victory in the November 16, 2019, election in Bayelsa State started encountering loneliness from the moment the news of the Supreme Court nullification of his election reached his community and residence in Igbogene.

National Daily gathered that Lyon has since then been abandoned by APC stakeholders, including members of the party Campaign Council in the Bayelsa State election, as well as the traditional rulers. They were said to have switched camp to the Peoples Democratic Party (PDP) and the principal beneficiary of the Supreme Court judgment, Douye Diri.

Ironically, the political associates and kinsfolk who were with Lyon 24 hours to his inauguration unto the time of his rehearsal on Thursday preceding the Friday swearing in, were present at the inauguration of Diri on Friday, including the music artists that were to perform at Lyon inauguration.
A stakeholder in Bayelsa and one of the campaign managers, on condition of anonymity, expressed his pains and regrets sighting members of APC and the governorship Campaign Council in attendance at the swearing in of Diri of the PDP as Governor of Bayelsa State within 24 hours that the baton of power changed hands. He lamented what he described as the ugly trajectory in politics, nay, Nigerian politics. He noted that he grinned in pains when he sighted key leaders of campaign fronts that worked with them during the elections seated at the event.

The stakeholder decried: “… key members of our campaign council attended the inauguration ceremony of Douye Diri.

“All the House of Assembly members did.

“The Paramount ruler of Igbogene, Lyons zone, offered the traditional prayers during the event.

“Our women and youth leaders were present. Even the artists we invited for our swearing in, found themselves in our opponent’s camp.”

“I grinned in pains when I sighted key leaders of campaign fronts that worked with us during the elections seated at the oval shaped hall.

“I cursed the day I started an affinity with politics.”

He narrated that a day before then event, they all met with Lyon on Thursday morning at his Igbogene residence. They accompanied the APC governor-elect to the parade ground for rehearsals same day.

He added that they held last briefing and assigned responsibilities to all subgroups for the Friday inauguration; but “preparations for the swearing in the next day appeared to be over by 1.00pm,” he bemoaned. The Supreme Court judgment subverted the whole arrangements and ended all activities to their disbelief. Lyon’s victory had been nullified by the judges, and INEC had been directed by the Court to withdraw the Certificate of return from Lyon and issue same to the party and candidate that had the next highest votes. And that party was the PDP, and the candidate is Douye Diri. It was obviously over for the APC and Lyon in Bayelsa at the at moment.

ALSO READ: How Oshiomhole failed to stop PDP in Bayelsa

The stakeholder further decried: “We all, the extended Campaign Council, along with all invited dignitaries, were having a bounteous lunch when the Supreme Court rulings filtered. David Lyon hurriedly left the house. Within split seconds, his house became a desert. And so it remained till today.”

It was disclosed that David Lyon had summoned an emergency meeting of his Campaign Council Thursday afternoon; a time that coincided with the time of the inauguration the next day. Four of 67 members were said to be present at the meeting.

The stakeholder lamented that none of the persons penciled down for cardinal appointments in the stillborn government came back to inquire, brief, or sympathise with Lyon, whom he identified as “victim of the worst judicial blow in the present time.” He added: “deserted and isolated, my friend David, gurgles with his inner self.”

He further lamented: “The once APC Bayelsa turned PDP within hours. Nobody was ready to miss the flight. Bayelsan politicians, like their counterparts in Imo State, switched to the direction of their stomachs.

“In Yenagoa, I cut the flu. I came to know that there is no clear symmetry in politics. Politicians are the same.

“The Epée politician shares the same DNA with his counterpart in Ebenese, Ideato South.”

He expressed regrets that politicians go to where they will benefit from the state resources, not interested in service delivery or fighting for justice.

He cited that Napoleon said: “God matches on the side of the stronger battalion”.

The concerned stakeholder in his anguish bemoaned: “I am yet to stray into the corners of a sincere politician. All are selfish, cheat and fake!!!

“Truthfulness and honour are scarce in their blood streams. Fear the political class. Heaven is not their target. Life after death is off their tangents.

“Politicians are callous and insensitive too. They are robbed of sense of guilt and shame.

“There is no sympathy in politics. Personal interest and not common values dictate in politics.”