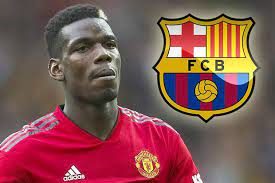 It is believed that Barcelona have turned down the chance to sign Manchester United’s midfielder Paul Pogba who is out of contract at the end of the season and he’s stalling on signing a new deal at Old Trafford.

National Daily understands that United have remained keen on keeping the France international with ongoing discussions with his agent Mino Raiola over a new long-term deal.

Though, it is understood that Pogba has been buoyed by the recent arrivals of Cristiano Ronaldo and Raphael Varane, but the Frenchman is believed to have slowed the progress over an extension.

And with such situation, Pogba is free to sign a pre-contract agreement with overseas clubs from January 1st and Spanish publication Sport is of the view that Raiola has been in contact with Barcelona to offer the midfielder to the Catalan giants

Previous reports suggest that Barcelona have formerly declared interest in Pogba, most notably in 2016 when he rejoined United and then again in 2018.

But with Barca’s latest posting of £470m as annual revenue loss last week and their dire financial situation it therefore means that they may not be in a healthy position to sign the former Juventus midfield maestro.

The 28-year-old who is believed to earn around £280,000-a-week at Old Trafford could even earn up to £400,000-a-week by signing a new deal, which are figures that Barcelona cannot stretch to at this moment in time.

And with the obvious fact of the need for Barcelona to ensure a further reduction in their wage bill after the exits of Lionel Messi and Antoine Griezmann, it therefore puts them out of the running for Pogba.