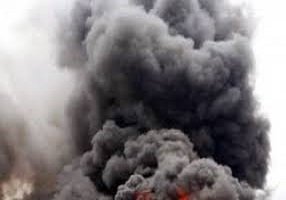 A factional executive of the Edo APC was rocked with a bomb that exploded 12 am today in his residence.

Lawrence Okah, however, escaped, and no life was lost.

The bomb shattered a part of the building and dug a hole in the ground.

A team of police anti-bomb squad was at the residence at about 8am to remove an unexploded explosive.

Okah said the incident happened at about 12:30am.

Chieftains of the APC such as Pastor Osagie Ize-Iyamu, Dr. Pius Odubu and others were at the residence for solidarity visit.

The APC ruling party in the state has been in crisis for more than a year now.

Things are worsening as the party prepares for its guber primary, the bone of contention between Gov Godwin Obaseki and his godfather Adams Oshiomhole..