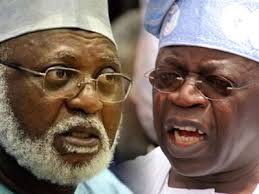 The fever of the 2019 presidential election is seemingly gripping incumbent President Muhammadu Buhari as the ruling elite allies who backed him in 2015 are abandoning him and mobilizing for a successor.
Since former President Olusegun Obasanjo in a statement in January made a clarion call on moving Nigeria forward and subsequently formed the Coalition for Nigeria Movement (CNM), the president had been worked up, thinking of ways to counter the plan to scuttle his re-election for a second term in 2019.
In a bid to curtail the spread of the network among the ruling elite, Buhari at the meeting with former Head of State, General Abdulsalami Abubakar (retd.), at the Presidential Villa, Abuja, was gathered to have begged for the support of the retired General to assist in appealing to Obasanjo, IBB and others to have rethink about him.
It was not certain if Abdusalami conceded to the appeal of the President, but it was expected that the former Head of State would at least not join forces with the Third Force led by Obasanjo.
Tinubu who was taken unawares by the Obasanjo’ statement calling for a Coalition of Nigeria Movement when he was at a meeting with President when the statement was made public on January 23, 2019, has suddenly become a bride of Buhari after he was abandoned since 2015.
Buhari had in about a fortnight ago held a closed door meeting at the Villa with Tinubu and former APC Interim National Chairman, Chief Bisi Akande, where he appealed to the APC national leader, seeking his reunion and solidarity. The President, thereafter, appointed
Tinubu the subsequent week to lead APC reconciliation and consultation initiative.
The last meeting with Tinubu and Akande, after the meeting with Abdusalami Abubakar, was the second in the series of consultation and reunification between the trio.