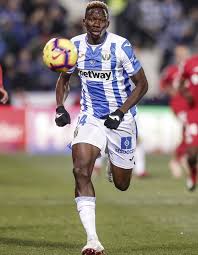 Kenneth Omeruo has revealed that CD Leganes are now targeting a UEFA Europa League ticket on the back of a splendid run in La Liga, National Daily gathered.

Omeruo was again solid in the heart of the defence as Leganes edged past Levante Monday night to climb to 11th on the La Liga table and they are now just four points outside the Europa League bracket.

“I am pleased we won the game and as a team it was another clean sheet for us,” said a delighted Omeruo who made his 17th straight appearance for Leganes against Levante.

“We are gradually pushing for a Europa League slot as we are now 11th on the table. This is huge considering our position as at Week 10 was 20th on the table.

The Chelsea loanee praised how his team defended their early goal against Levante.

“Levante came out to play, but we are lucky as a team to have scored early and we were able to defend the goal till the end of the match,” he said.

How did it feel coming face-to-face with fellow Super Eagles star Moses Simon?

“We both had a good game and we exchanged our jerseys after the match,” Omeruo said.