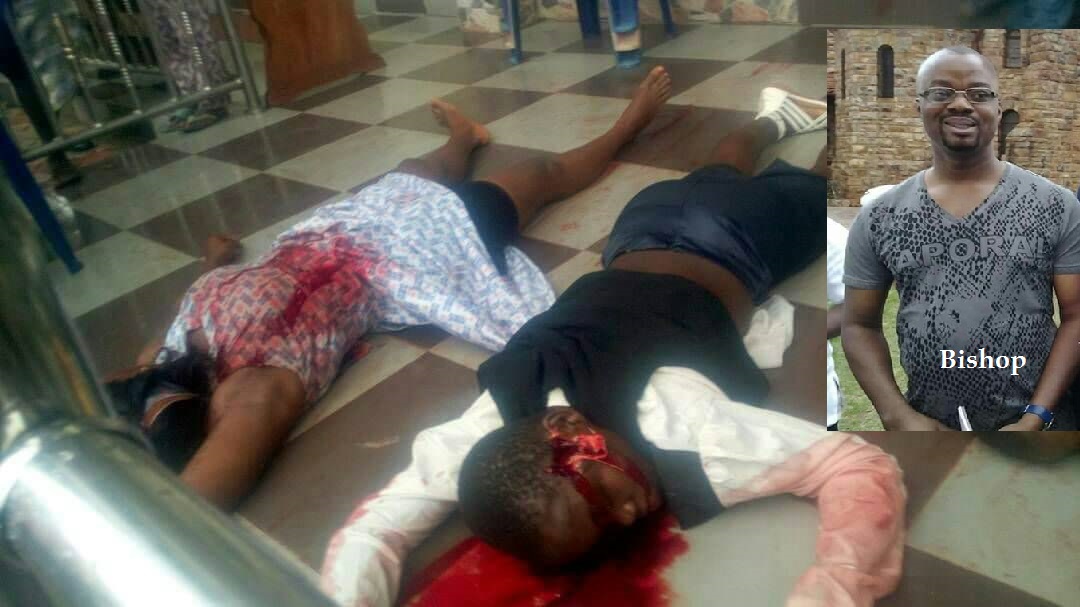 The mystery over the invasion of a Church and killing of some worshippers at St. Philips Catholic Church, Amakwa Ozubulu, Anambra State, on Sunday, August 6, 2017, has continued to be screwed in haziness. Whereas the Police have disclosed that arrests have been made, and Governor Willie Obiano of Anambra State, also acknowledged that the killing by unidentified gunmen is the continuation of a drug war in South Africa, the substantive issue generating the arms conflict is yet to be ascertained. Conflicting reasons have been adduced by several stakeholders, which, however, complicate Police investigation of the Church killings.

There were insinuations that Fulani herdsmen might have been responsible for the invasion of the church and killing worshippers; this, the leader of the herdsmen in Anambra State has debunked.

There is also another hypothesis of the gun battle being masterminded by youths in the North to complement their Kaduna Declaration and incite violence from within the Igbo land. Again, leaders of the northern youths have also beckoned on the international community to hold Nnamdi Kanu, IPOB leader, responsible for outbreak of violence in the South East.

Meanwhile, the hypothesis of a battle from within seems to be gaining more revelations in the Ozubulu Church killings.

A stakeholder from the violence clime in a narrative gave more insight on the notorious activities of one Aloysius Ikegwuonu, a drug baron in South Africa, who eliminated his school friend over distrust in drug transactions, leading to reprisal attacks and vengeance by the deceased community.

Though, the narrative of this stakeholder also has inherent impulse of sentiments and biases, but it provides clues to the Police on tracking the killers who are taking vengeance on innocent citizens.

A stakeholder from the zone, Somuadila Ugwummadu, identifying to be among Biafra Writers, in his compilation “MASSACRE: THE HIDDEN TRUTH REVEALED”, gave detailed profile of the drug South African baron, Aloyee, a.k.a. Bishop, who is from the community  and his nefarious attitudes to his friends which was said to precipitate killings in Ozubulu.

Following different versions of false news peddled by the Nigerian media and most regrettably, respected individuals, to narrate the very unfortunate incident that happened at St Philips Catholic Church, Amakwa Ozubulu, Biafra Writers, in our culture has dug out the details of this event and how it deteriorated to the August 6 massacre.

Aloysius Ikegwuonu, presently a drug baron in South Africa, was born in 1981 to the family of Chief Ikegwuonu, Amakwa Ozubulu. He grew up in a very poor home and often helped his mother who trades at Orie Akpu market, Off Ugwu Orie Bus Stop, Amakwa Ozubulu.

‘Aloyee‘ as fondly called by his friends in his early youth stage, first came to limelight in 1999 when he became the senior prefect of Comprehensive Secondary School, C.S.S., (formerly College of Basic Studies, C.B.S.) Egbema Ozubulu; a school founded by Reverend Father Nwabaju Izuchi, a United States based Catholic priest.

Right after his secondary school studies, which he finished after the May/June WASSCE examination in 2000, he traveled to South Africa on March 2001 where he became a multi-millionaire within his first four months of his stay there. He came back nine months later(December 2001) and splashed his money around. This was the first major drug deal advert in Ozubulu, a land formerly known for the bravery of her indigenes, tranquility and high moral standards. (This seed Aloyee planted did not take time to bear fruits.

With this, Aloyee attracted many friends to himself, especially, his school mates at C.S.S. They indicated interest to serve him and do whatever he wants them to do as long as they will end up as ‘successful’ as he is and as quick as he made it. There was an exodus of Ozubulu youths to South Africa between 2004 and 2007. With these many people around him, Aloyee who had adopted the name ‘Bishop’in South Africa, needed someone he could trust better. He went for his best friend in the aforementioned secondary school, Ginika Nwoke.

Ginika, alias Giniyee, hailed from Mbaise in Imo State; he is an orphan and the only child of his parents. He grew up with his uncle, Ite Ego (a butcher at Orie Akpu market, Ugwu Orie Ozubulu) all through his childhood and adolescent age. He gained admission to study Psychology at Nnamdi Azikiwe University, Awka in 2001 and was living at an unpainted two storey building, a lodge for students, about 100 meters from Unizik temporary site junction. Due to pressure from Bishop, he abandoned his university education just after his 200 level. Giniyee’s roommate at the University was Nonso Ewulu, alias Ajagara Igwe, who studied Political Science in the same university 2001-2005. Ajagara Igwe was also Giniyee and Bishop’s classmate at C.S.S. Ozubulu.

Bishop’s notorious act began with his own mother. He allegedly sacrificed his mother (who had rejected his ill wealth) to a cult group. This allegation seemed more truthful when he refused to raise a stone at his mother’s grave. Bishop leveled his father’s home with an interlocking tiles months after his mother’s death and till today, you cannot identify his mother’s grave in his father’s compound.

To douse this rumor, Bishop engaged in an aggressive philanthropic aid. He renovated most churches at Ozubulu (particularly St Michael’s Catholic Church, Amakwa Ozubulu) the Igwe’s palace and instituted a charity foundation. He also penetrated the state government, donates to the state police and the local vigilante groups.

These events were happening so fast, Bishop was audacious, intimidating and energetic. His friends that traveled to South Africa had started complaining about him: his intimidation and oppression; killings had started; it has become the survival of the fittest, the jungle of beasts. More than six people had died, all from Anambra State in some misunderstanding between Bishop’s group of drug cartel and other groups of drug cartel in South Africa. Even at this stage, no one took any information about Bishop so seriously.

Life went on and on.

The peak of this crisis was a clash between Bishop and his best friend, Giniyee. Bishop claimed he handed Giniyee a package (hard drug) to deliver to a buyer but he ended up with some cooked up stories with the intention of duping him. Giniyee denied this, but stated that Bishop’s enemy ambushed him at the point of delivery (in what seemed more like a set up) and made away with the package – a package worth hundreds of millions of naira.

ALSO SEE: Meet ‘Bishop’ believed to be the target of Anambra shooting

It got so heated that it was reported to the Igwe of Ozubulu who summoned the two friends with their families and pleaded to all to exercise patience till the truth be revealed. Bishop rejected Igwe’s verdict and swore that “isi ga ada” (meaning that ‘head must fall’) within some months if his money is not remitted back to him.

Few months later, the stunning news broke out, September 2015, Ginika Nwoke was shot died in South Africa, the only child, an orphan with a wife and a little girl was killed. An Igbo adage says that “ihe mee onye ara, i mara na onwere mmadu” (meaning that when something happens to a mad man, you will know he has people). Mbaise indigenes made it clear that the only thing that will suffice them is a revenge, Bishop must be killed or a total war against Bishop and his kindred.

Situation started to deteriorate; between October 2015 and March 2017, Ozubulu youths were gunned down on monthly basis in South Africa. The owner of Vacarmata (located around Michael Junction, Egbema Ozubulu), Mr. Obinna Ebuzeme, Mrs. Nchedo (Nkwado’s wife), and many others, especially, the alumni of C.S.S. have been killed.

Since then, Bishop attends occasions with over 50 security personnel, very intimidating entourage, but Mbaise indigenes had not given up. In this latest event, he came back in July 2017, he is still being tracked. Investigations revealed that he was to be gunned down on Sunday, August 6, 2017 at St Philips Catholic Church, Amakwa Ozubulu. Mysteriously, he got the news and escaped from Amakwa at mid night (Saturday, August 5, 2017).

The killers invaded his church still assuming he was there, opened fire and killed more than a dozen people. To prove it was targeted and purposed to get at Bishop, Bishop’s father ran away from the church building with a bullet shot but the killers chased him and shot him severally to ensure he dies.


OBIANO’S ROLE
Bishop is a very good friend to Willie Obiano, Governor of Anambra State; so, we are not surprise that Anambra State forwarded their report in less than two hours. Yes, it’s a drug war, as they disclosed, but we must disclose it here that Obiano has tactically exempted Bishop from the whole story. From intelligence, Anambra State Government is about to frame an innocent young lad up (also an Amakwa indigene). We must speak against this and Bishop must face the wrath of the law.

The narrative reveals that the origin of the killers are known; and they should not be allowed to take laws into their hands. The Police may deepen investigation in the direction of the Mbaise community in Imo State, as well.