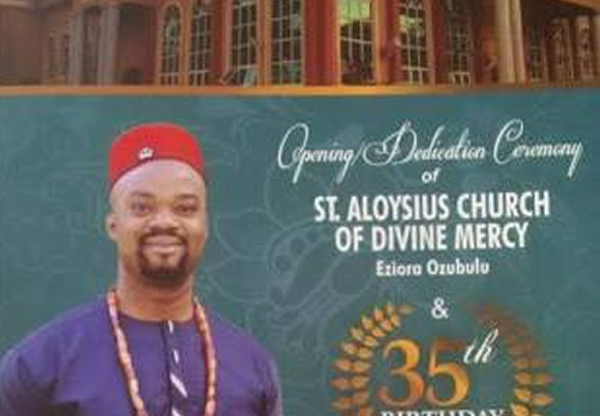 The name Aloysius Ikegwuonu has been trending on social media since the devastating attack at St. Philip’s Catholic Church in Ozubulu, Anambra state.

Reports have it that the gunman had invaded the church in search of Ikegwuonu, popularly known as “Bishop”, who is said to be having a prolonged misunderstanding with a relative whose name is yet to be ascertained.

Although not much is known about Ikegwuonu, there are reports that he is a drug dealer based in South Africa.

Despite the negative reputation, people in his community see him as a philanthropist.

He is said to have tarred some roads in his community – Amakwa Ozubulu in Ekwusigo local government area – and had also contributed to the building of St. Aloysius Church of Divine Mercy, still in Ozubulu.

Ikegwuonu is also said to have a non-governmental organisation – Ebubechukwu Uzo Foundation Ozubulu – which is focused on members of his community as well as neighbouring communities.

Among the organisation’s objectives, according to the page, is “to assist churches in various ways in order to bring people nearer to God.”

Other objectives are “to assist in the development of quality education for children, youth and adults” as well as “to help improve healthcare services for the people.”

Ikegwuonu was a said to have instituted a salary scheme for the people of Ozubulu, including the aged.

Ikegwuonu was also conferred with the ozo title – one of the most revered positions in Igbo land – by Igwe of Umuje (a.k.a Igwe Talu Nchara), according to a December 2014 post.

“Ebubechukwu Uzo receiving Ozo title as Uzochukwu Kwalu 1 of Umuje Anyamelum LGA on 14th Decemeber, 2014, after which he collected the title with the sum of N500, 000,” the post read.

“The Igwe of Umuje said he gave the title to Chief Alloy because of his kind gesture to indigenes of Umuje.”

Anambra Church Killings: Another angle to story emerges as Presidency vows to bring perpetrators to book