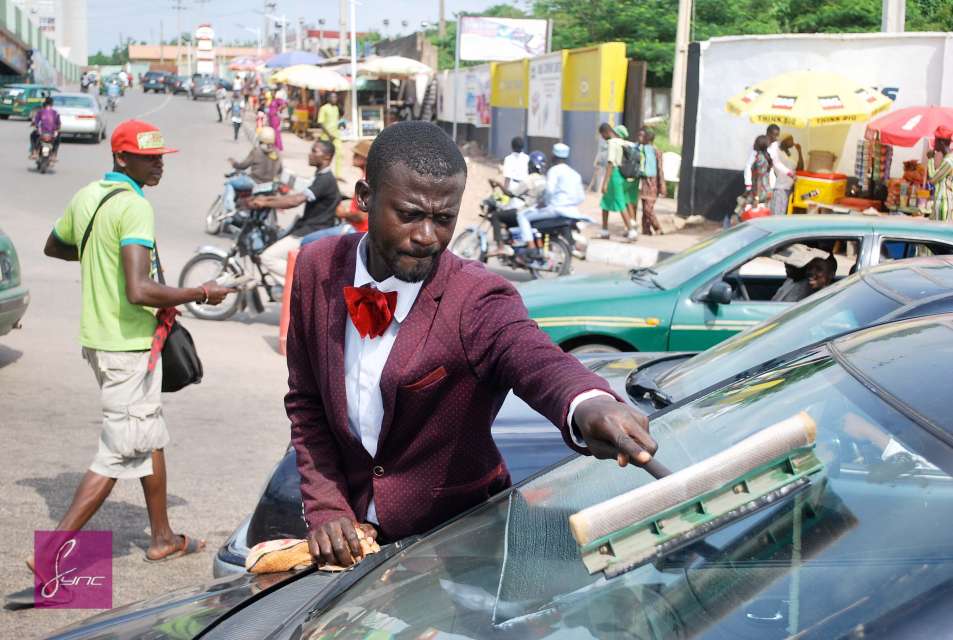 In Congo, Sapeurs (the Society of tastemakers and elegant people), are known for their love of luxury tailoring even while performing the most mundane of tasks. But one car windscreen cleaner in Nigeria’s Abeokuta is competing for this title.

who is a university dropout in his early thirties, turned to the streets to make a living and save enough money to start his own business.

Wearing a bright polka dot suit and red velvet bow tie, Olatoyan says he hopes to return to school one day and finish his studies.

“I didn’t want to be wandering the streets doing nothing” he explains, adding he wanted to make sure people knew he was serious about his work.

“He is the first suited windscreen cleaner I have ever seen”, says photographer Daniel Sync, who decided to take photos. “We need more innovative citizens like Abdulahi in Nigeria”, he added.

Sync spotted the cleaner on his way to work and rushed to the office to pick up his camera. The photographs have since gone viral – with Olatoyan being offered a job at Nigerian clothing line OUCH.

The label’s designer Uche Nnaji posted on Instagram that Olatoyan could come work at his company, and listed seven reasons why he deserved the job. He asked his 18,000 followers to help track down the elegant squeegee man.

Olatoyan has now been offered a position as ‘style doctor’ at the menswear brand: “I have a team of young people that I call style doctors,” says Nnaji, “when I saw him I thought this person is someone that likes looking good and can style others”.

“I saw attitude in him and thought if this man is doing this just to go and wash cars, he is someone that will work with a different mindset even if he’s doing the least popular job in the company” he added.

Olatoyan will soon begin offering his own distinctive opinions on style and taste to customers.

Share this on WhatsApp
Related Topics:Abdulahi OlatoyanWorld’s Most Dapper Squeegee Man
Up Next

Delmwa: Nigeria’s behind -the-screen sheriff has a new show in town