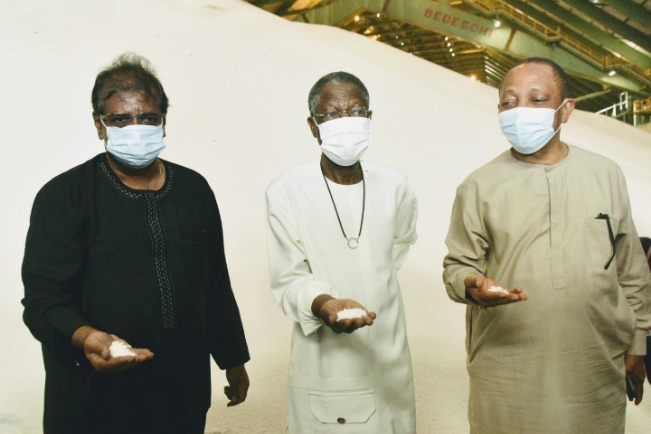 The Minister of Information and Culture, Alhaji Lai Mohammed, has commended the Dangote Group for leading Nigeria’s industrial revolution towards ensuring food and energy security.

The News Agency of Nigeria reports that Mohammed made the assertion after a media tour of the sites of the Dangote Refinery, Petrochemicals and Fertiliser Projects in Ibeju Lekki, Lagos on Sunday.

The minister said: ” We have just been taken on a tour of what is undoubtedly one of the busiest construction sites in the world, the Dangote Refinery and Petrochemical Plant.

“Before then, we visited the Dangote Fertiliser Plant and then the Jetty.

“After visiting the facilities, one can conveniently say that Dangote is leading Nigeria’s industrial revolution.”

According to him, the coming into being of such massive projects were made possible by the enabling environment provided by the administration of President Muhammadu Buhari.

He said new businesses were springing up in all sectors as a result of the conducive business environment created by the government.

Mohammed said the support had enabled the coming on stream of the $2.5 billion Dangote Fertiliser Plant which was inaugurated recently by the president.

The minister said the plant would produce three million metric tonnes of Urea annually and was already exporting fertiliser to the United States, India, Brazil, Mexico and Argentina.

He said that the 650,000 barrels per day refinery was due for opening later this year, adding that both projects would guarantee food and energy security for Nigerians.

and huge value addition that will contribute to the increase in Gross Domestic Product.

On his part, Mr Devakumar Edwin, Group Executive Director, Strategy, Capital Projects and Portfolio Development, Dangote Industries Ltd., thanked the government for the support towards the completion of the projects.

Edwin said the refinery was the world’s largest single train petroleum refinery and was designed to maximise production of Premium Motor Spirit (PMS) with a capacity of about 53 per cent compared to 20 per cent by other refineries.

He said: The petroleum refinery can meet 100 per cent of the requirements of Nigeria, of all the liquid products – Gasoline (PMS), Diesel (AGO), Kerosene (DPK) and Aviation Jet Fuel (Jet A-1).

“While 60 per cent of the production of this petroleum refinery can meet the entire requirement of Nigeria, the rest 40 per cent will go for export, generating huge amount of foreign exchange.”

Justifying the government’s decision to acquire a 20 per cent stake in the refinery, Edwin noted that the project was of strategic national importance and a win-win for the nation and the Dangote Group.