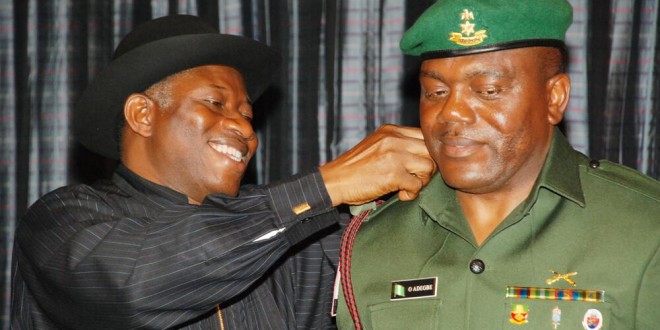 – Ojogbane’s counsel says he is in the United Kingdom

– Adds that he was escorted to the EFCC’s office

– Demands apology from The Sun within the next 12 hours

Fresh reports emanating from the camp of ex-president Goodluck Jonathan’s Aide-de-Camp (ADC), Colonel Ojogbane Adegbe have it that the Army chief was not arrested.

Reports had surfaced last week that the former ADC was arrested by the Economic and Financial Crimes Commission (EFCC) over corruption allegations in Goodluck Jonathan’s administration for which ex-National Security Adviser (NSA), Colonel Sambo Dasuki is being prosecuted.

In a letter written by the military personnel’s legal adviser, Chief Ogwu Onoja (SAN) and obtained by Daily Post, he expressed shocks and disbelief over the recent viral report which quoted him as saying that if he was forced to reveal what transpired under the last administration, Nigeria will boil.

Ex-president Jonathan’s aide denied ever making such controversial statement against his former boss during his interrogation at the EFCC office.

“We have read with shock and disbelief the lead story in your newspaper, dated Friday 12th February, 2016, titled: ‘If I open up, Nigeria will burn. Detained Jonathan’s ex-ADC warns, as EFCC declares Tompolo wanted’,” the letter read.

“We have examined the full story contained on page 7 of the paper and the different statements credited to him and compared them with provable facts. This comparison shows without any doubt whatsoever that, among others, the following of your statements about what transpired are false:

While explaining the true state of things over the arrest of his principal, the lawyer informed that, “to set the record straight, all the issues raised by your paper above only exist in the figment of your imagination. This attitude of yours is highly unprofessional and capable of heating up the polity and has indeed brought the name of

“We are constrained to set the records straight by informing you that our client was not arrested as reported by your newspaper.

“To set the records straight, Col Adegbe was not arrested by EFCC as claimed by your newspaper. It is known fact that Col Adegbe has been in the UK for studies having been released by the Nigerian Army to do so.

“The EFCC wrote the military authority to invite our client for questioning with respect to an ongoing investigation to clarify certain allegations made against him. The military authority invited him back to Nigeria, which he willingly came in and reported to the office of the provost marshal in Abuja on Wednesday 10th February 2016.

“Due to his late arrival and the inability of the Army to complete their documentation, he was asked to report to the Garrison Mess in Mogadishu Cantonment in line with military tradition till the next day. Upon completion of the necessary paper work, he was excorted to the EFCC where he wrote his statement and was interrogated.

“We are also familiar with the statement he wrote at the Economic and Financial Crimes Commission (EFCC) and are also acquainted with answers he gave to questions, so we are at a complete loss as to how your newspaper arrived at that highly sensational and false story. The lawyers and representative of the Nigerian Army were present through out the interrogation. There was never a time Col. Adegbe threatened to burn down Nigeria.

“He has demanded a retraction of the said story with the same banner headline and an apology from the Sun Newspaper within 12 hours to avoid legal action.

“In view of your false and malicious statements, we demand a retraction of the false story with the same banner headline and an apology for your fictitious and highly embarrassing report. The retraction and apology must carry and be accorded the same prominence not less than 7 editions of your publication. We also demand that the retraction be syndicated to all your prints and the online media links in the same way and manner you spread the false story.

“We demand this to be effected within 12 hours while we advise our client on the legal implication of this malicious publication.”

Speaking during a recent service in Lagos, the state chairman of the Christian Association of Nigeria (CAN), Apostle Alexander Bamgbola, applauded the ongoing anti-corruption move by President Muhammadu Buhari, stating that nobody should be scared, but wants ex-president Goodluck Jonathan prosecuted if he’s found guilty.

“What is wrong with it? A former President of Peru (Alberto Fujimori) was jailed. Also, a popular prime minister of Israel (Ehud Olmert) was jailed. If a nation puts you in a position of trust and you betray that trust, you should go to jail no matter who you are.

“I have no sympathy for anybody. Just make sure you get it right, and we get the facts right as well,” he proffered when asked what his stance was on the call for the prosecution of Jonathan.