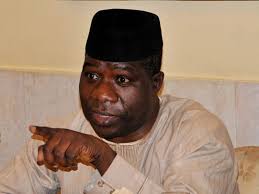 APC stalwart and former honourable Opeyemi Bamidele has been flown to the United Kingdom for further treatment following the extraction of bullets from his leg and belly at Ekiti state hospital two weeks ago.

Opeyemi was among the five party members caught in what the police insist was accidental discharge from the gun of a mobile police officer during a rally for guber candidate Kayode Fayemi at the party’s secretariat in Ado Ekiti.

He was flown out in a private jet owned by APC national leader Bola Tinubu who insisted Opeyemi must be taken abroad Friday night for better treatment though he was already stabilised in Nigeria.

Opeyemi was Tinubu’s commissioner for communication and strategy when the national leader was Lagos governor.

The police in Ekiti have concluded the orderly room trial of the policeman said to be serving with 20MPF in Lagos and that he would soon know his fate.

He also confirmed that the unnamed politician was still in the custody of the police and would be charged to court as may be necessary for illegally engaging the services of the policeman.