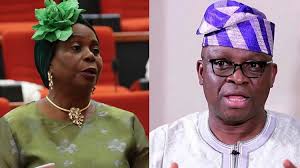 The State Executive Committee of the Peoples Democratic Party in Ekiti State has reaffirmed former Governor Ayodele Fayose as the leader of the party in the state.

The SEC dissociated itself from the purported stakeholders meeting which had earlier declared the Senate Minority Whip, Senator Biodun Olujimi, as the party leader.

In a communiqué issued at the end of their meeting in Ado Ekiti, the SEC alleged that Olujimi and a former PDP’s state secretary, Dr. Tope Aluko, were agents of the All Progressives Congress causing destabilisation in the PDP.

Aluko had led some aggrieved PDP members to invade the party’s secretariat on Ajilosun road, Ado Ekiti on Thursday to accuse the state executive members of making suspicious withdrawals from the party’s account.

In the communiqué made available to journalists the SEC while condemning the invasion restated the expulsion of Aluko from the party.

The communiqué added, “That any facilitation of crisis in the party this time of approaching election is regarded as an anti-party activity.

“That the promoters of the crisis are agents of APC government employed to destabilise the party in the run-up to the presidential election.

“PDP in Ekiti State under the leadership of Gboyega Oguntuase is committed to the success of all its candidates in the coming elections especially our presidential candidate, Alh. Abubakar Atiku.