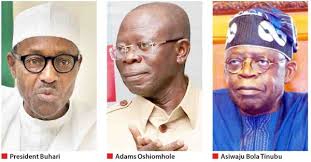 The national leader of the All Progressives Congress (APC) has intensified efforts to save APC national chairman, Adams oshiomhole, from being removed prematurely from office by discontented party stakeholders following the post-primaries conflicts rocking the party.

Reliable Presidency source revealed to National Daily that during Tinubu’s visit to President Muhammadu Buhari at the State House, Abuja, last Wednesday, the former Lagos State Governor spent time discussing Oshiomhole with the president, begging him not to approve the sack of the former Edo State Governor as APC national chairman.

The source disclosed that Tinubu bad appealed to President Buhari that it will be a big shame for the ruling party to sack its national chairman who is less than five months in office in a tenure of four years, stating that the action will increase instability in the party.

The APC national leader was said to have further discussed with the president that Oshiomhole’s sin is his commitment to entrenching party supremacy, observing that those the new leadership does not favour will always complain and oppose change in the party.

The national leader had further traded his support for the president in 2019 to appease President Buhari not to concede to the removal of the national chairman.

After the Wednesday meeting with the president, Tinubu had told State House Correspondents that Oshiomhole has committed no offense to be removed as APC national chairman. He had stated that the only offence was his insistence on party supremacy, reiterating that the party must be supreme and that the party supremacy cannot be compromised.

President Buhari was however, said not to have given him his word on Oshiomhole but did not also concede to his removal.

Some APC governors have been at war with Oshiomhole over imposition of candidates in their states during the primaries by the national chairman. The conflicts in the APC were taken to high pedestal that threaten the tenure of  the national chairman, causing apprehension in the party over his removal, which Oshiomhole, himself, acknowledged and raised alarm.