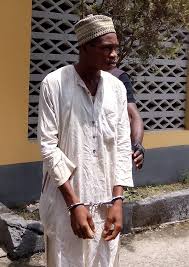 Yinusa Dahiru, who abducted and forcibly married and impregnated a Bayelsan girl Ese Oruru, in 2015 has been sentenced to 26 years in prison.

Ese, now a mother was 14 years old when Dahiru took her from her mother’s shop to Kano where he converted her to Islam before impregnating and keeping in Kano’s Emir palace. The deposed Emir Sanuai Lamido was on throne then—and was out to Mecca for lesser hajj when it happened..

On February 29, 2016, Ese was rescued by the Kano State police which handed her to the Bayelsa government. She was already five months gone then.

Dahiru, a tricycle rider in Yenegoa, had claimed the girl was in love and that was why she eloped with him.

The judgement will run concurrently.