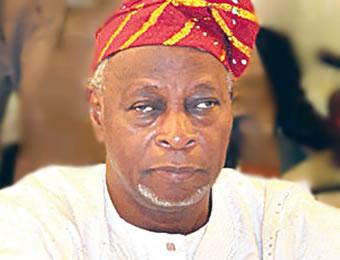 Former Presidential Candidate of Alliance for Democracy (AD) and All Peoples Party (APP), Chief Oluyemisi Falae on Sunday told worshippers at the historic St. David’s Cathedral, Ijomu street, Akure that he was not involved in the massive diversion and looting of security funds traced to ex-National Security Adviser, Colonel Sambo Dasuki (rtd) and other notable politicians and media executives.
Falae, amidst jeers and boos, explained that the N100 million , which the former Board of Trustees (BOT) of Peoples Democratic Party (PDP), Chief Tony Anenih, purportedly paid to him was in no way connected to the NSA funds, but to provide logistics for voters’ mobilization in the alliance forged between the Social Democratic Party (SDP) and the then ruling party , PDP.
Chief Falae who is a regular worshipper at the church said that he had appeared on some media outlets to clear his name off the raging scandal, disclosed that he had furnished the Bishop of Akure Anglican Diocese, Right Reverend Simeon Borokini the trait papers on the transfer made to him by Chief Tony Anenih.
He said a copy of the same document had been deposited with the Provost of the Cathedral, Very Revd Osotayo.
Falae, recently freed from the captivity of Fulani kidnappers after allegedly paying a ransom of N5 million, said that he was not amongst the clique that sabotaged and compromised the security of Nigerians. The former Secretary to the Government of the Federation and former Finance Minister said that he would take legal action against any attempt to mis-characterise him over the $2.2 billion arms scandal.
He promised to continue to engage the media to exonerate himself over the heightening allegations.
Members of his party are split down the middle on whether to believe the Economic and Financial Crimes Commission (EFCC) leakages on the scandal.
Some SDP members alleged that Chief Falae played smart during the last elections by always making them to think that their party had no money.

AJ protests detention of El-Zakzaky, 230 Others