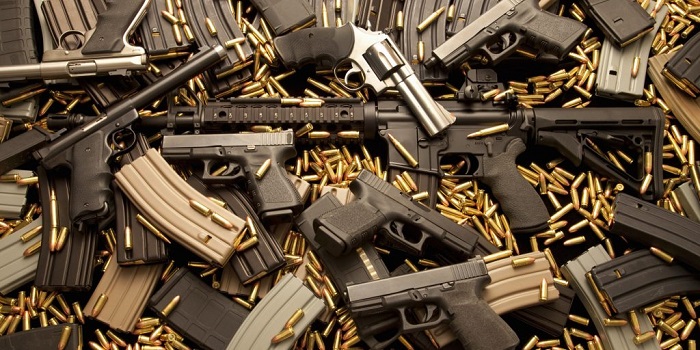 Share this on WhatsApp
Spread the love
By ALEX OLISE
Federal Government through its security agencies comprising the military, Police and the State Security Services are working assiduously to burst some hidden illegal arms depots purported to belong to unknown groups planning to unleash terror in the South Eastern part of Nigeria for selfish reasons
National Daily, gathered at the weekend that top security operatives had been deployed to some black spots to track the gang involved in the gun running.
It was further learnt that those behind the illegal gun deal were strongly involved in the recent killings at Ozubulu town in Anambra State where scores were massacred inside St. Philip  Catholic Church.
The gunmen had trailed their target to the Church but only saw the father inside with other members. So to register the vengeance, they opened fire on the congregation killing scores including the father of their target. The killing prompted the Inspector General of Police (IGP) Ibrahim Idris to direct full scale investigation and beefed up security in the area especially churches in Anambra and other neighbouring states.
The incident spurred the Police and other security agencies to embark on investigation which reveals that there is large circulation of illegal arms not only in Anambra but the entire states in the South East.
ALSO SEE: Boko Haram insurgents kill 11 in Cameroon
A security expert, Dr. Paul Eze told National Daily, that the Federal Government need to step up its security checks around the South East because the current clamour by some groups over the actualization of a Biafra Republic has already contributed in large circulation of arms and ammunition in the zone. The incessant attacks by Fulani herdsmen have also moved some groups in the South East to start spoiling for war to defend their region whenever it happens.
Investigations carried by National Daily revealed that the South East are known for their gift of being the only people that can manufacture any type of gun like AK47 riffle, AK49, Pump Action among others. All are manufacture in hidden places within Awka, the capital of Anambra State.
A businessman told National Daily, that even without importing, the Igbo can acquire any type of weapon within their area. So the federal government should endeavour to address some critical national issues like the quit notice threat issued the Igbos living in the North, and the current agitation by the Indigenous People of Biafra (IPOB).
It could be recalled that President Mohammadu Buhari on arrival from his UK medical trip down tension on Sunday during his speech when he assured that Nigerians can live anywhere in the country. He also talked tough on the unity of the nation as the country is not negotiable, calling on those advocating for restructuring of the country to forget the idea.
The president, according to security sources close to National Daily, will meet some top security chiefs before the weekend to asses some proposals from security agencies on how to find lasting solution to numerous cases of kidnapping, Fulani Herdsmen clashes with farmers among other crimes ravaging the country.
Share this on WhatsApp
Related Topics:armsBiafraBiafra AgitationSecessionSouth East Nigeriaweapons
Up Next