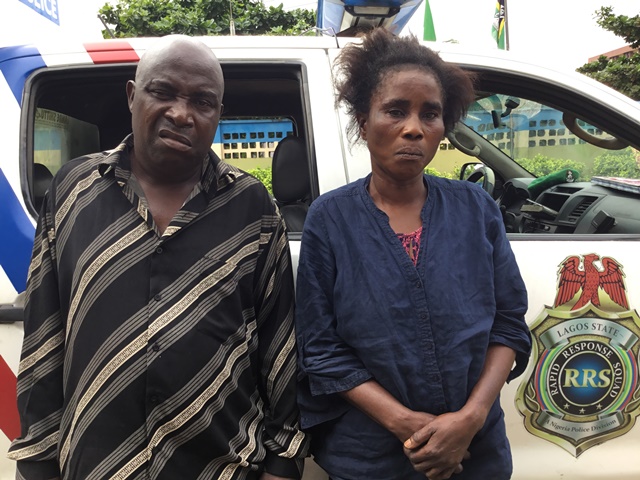 Share this on WhatsApp
Spread the love
By  OKOSUN DENNIS
Four members belonging to two separate fraud syndicates operating in some parts of Lagos
have been arrested by operatives of Rapid Response Squad of the Lagos State Police Command.
National Daily learnt that the two fraud syndicates operate in Ikeja, Maryland, Ojodu-Berger, Agege and Oshodi parts of the metropolis.
They include three males and a female, and all were arrested in two separate cases of fraud on Thursday and Saturday in Ikeja and Oshodi.
The first group, comprising Chinasa Sunday, 44 and Osadebe Aigbe 30, were arrested in Ikeja after several days of being under the surveillance by men of RRS Undercover team for defrauding a lady of the sum of N85,000.00.

It was gathered that one Grace Enitan, had reported at the RRS Headquarters that a syndicate of four men picked her up in a taxi and duped her of N85,000.00 while she was heading to Ikeja.
Investigations revealed that Chinasa Sunday and Osadebe Aigbe were involved in the scam while their ring-leader, identified as Martin is on the run.
The victims who have confessed to the Decoy team of  RRS headquarters after their arrest identified the two suspects and their respective roles in the scam.
Chinasa while pleading for leniency explained that he joined the syndicate after losing his job in February, 2017.
He explained that they picked up the suspect in Olowopopo Way, Ikeja, adding that her role was to monitor their victims while the scam lasted.
The second syndicate members were arrested on Saturday after a failed bid to swindle a food seller of over N120,000 and dispossess her of her jewelry in Oshodi.
ALSO SEE: N8.6bn probe: EFCC freezes Bola Shagaya’s bank accounts
The victim, identified as Rukayat Aderinwale was accosted and hypnotised by a syndicate of five members before dispossessing her of a purse containing N120,000.00 and her mobile phone.
They were leading her away to another location when the lady regained her consciousness and called out to RRS officers stationed nearby.
The officer arrested one Sunday Atanda, 56, living in 13, Pero Street, Agege and a 58-year-old Fausat Tijani, a pure water seller in Akala, Mushin, while three other members of the syndicate escaped.
In his confession, Atanda gave the names of other syndicate members as Kayode, Shina and Lateef. He added that the syndicate only operated on the road.
He stressed that what they wanted to achieve was to dispossess the mother of three of her money, phone and jewel. He maintained that he joined the team to raise money to feed his family. 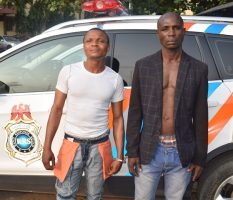 He disclosed that the team operated in Agege and Oshodi, adding that Lateef is their ring-leader and he dictated when and where the syndicate would operate every day.
Confirming the development, Police Public Relations Officer of the Lagos State Police Command, ASP Olarinde Famous-Cole, said that the command is reinvigorated to make Lagos inhabitable for criminals.
He added that investigation was on-going to arrest other syndicate members.
Share this on WhatsApp
Related Topics:fraud syndicatesRapid Response Squad (RRS)
Up Next

FG moves against arms build up in South East