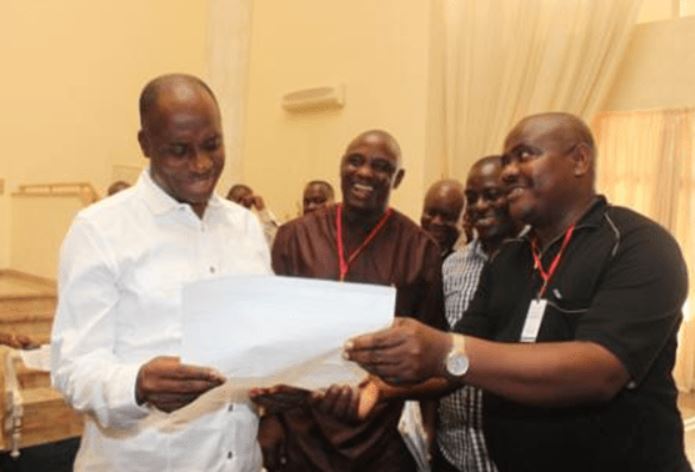 The political fireworks triggered by Governor Nyesom Wike of Rivers State is becoming blown up by the stakeholders of the All Progressives Congress (APC) in Rivers State, who slammed Wike for perceived falsehood and untrue utterances. The APC State Publicity Secretary in Rivers, Darlington Nwauju, in Port Harcourt, slammed Governor Wike for his attacks on his predecessor, Rotimi Amaechi, former Minister of Transportation in the APC government.

Nwauju warned that the APC, while accepting criticisms, would not permit Governor Wike to ridicule the personality of Amaechi, peddling falsehood against him.

Nwauju declared that Amaechi is not a failure as Wike claims. He emphasized that there are records that can provide Amaechi’s excellent achievements in the Ministry of Transportation.

The State Publicity Secretary disputed Wike’s utterance that Amaechi did not attract federal infrastructures to Rivers State, displaying a PowerPoint compilation of 18 projects and human development programmes facilitated by Amaechi in Rivers State.

The projects Nwauju listed include the expansion of the Afam Power Plant in Oyigbo Local Government Area, Rivers State, the ongoing rehabilitation of sections one to four of the Enugu-Port Harcourt Expressway, the ongoing construction of N120 billion Bodo-Bonny Road, the new terminal at the Port Harcourt International Airport – met halfway under construction but  completed and commissioned by President Muhammadu Buhari, including the ground-breaking for the reconstruction of the Port Harcourt-Maiduguri rail line.

Nwauju maintained that the expansion of the ports and the creation of empowerment schemes through the agencies under the Ministry of Transportation, including the Nigerian Maritime Administration and Safety Agency (NIMASA), are other intervention efforts of Amaechi.

Nwauju also declared: “the claim that Amaechi no longer has access to the Presidential Villa is far from the truth as the former minister still has a wonderful relationship with President Buhari and does not need to be seen at the Villa to prove his closeness with the first family.”

Governor Wike had waged hydra-head war against several political leaders within Rivers, the PDP, the South-South, and others. The APC in Rivers State is beginning to give him a pushback in anticipation that the governor ends political hostilities.