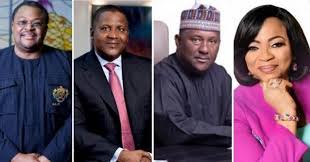 Four Nigerian businessmen are among African richest, according to Forbes’ 2020 version of its latest billionaires ranking.

According to the latest ranking, Dangote’s net worth is now estimated at $10.1 billion. The sixty-two-year industrialist occupied the top spot in 2019, with an estimated net worth of $10 billion.

He is now building what has been adjudged the largest refinery in the world – the Dangote Refinery – which is expected to further boost wealth once it becomes operational.

Much like in the 2019 ranking, Dangote is followed closely by Globacom’s Mike Adenuga who took the third spot. Mr. Adenuga has an estimated net worth of $7.7 billion according to Forbes.  This marks a significant reduction from the $9.2 billion he was estimated to have been worth last year. Little wonder his ranking had dropped from the number two position in 2019 to number three this year.

The third Nigerian on the list is Abudulsamad Rabiu. He is the Chairman of BUA Group, and has an estimated net worth of $3.1 billion in 2020. This marks a rise from last year’s estimate of $1.6 billion.

To this end, the billionaire was ranked the 8th richest person in Africa. He amassed most of his money through his cement manufacturing business.

Folorunsho Alakija who occupied the 20th position in this year’s African billionaires ranking has an estimated net worth of $1 billion. She had amassed her wealth through his oil and gas ventures.

Share this on WhatsApp
Related Topics:billionaires rankingForbes’ richest Africans
Up Next