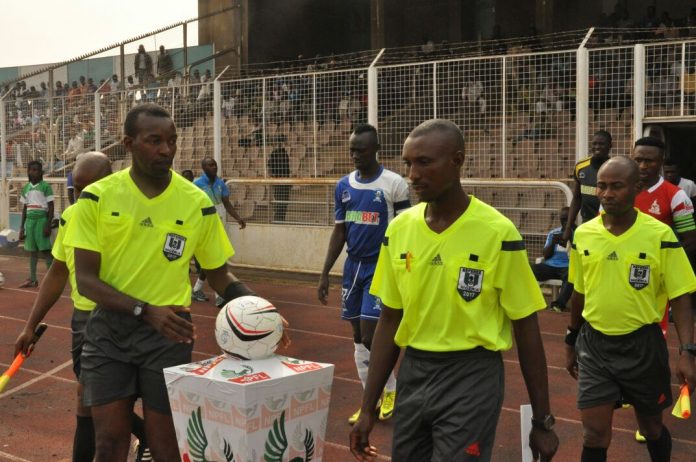 The hammer of the NFF Referees Committee has fallen on four referees, comprising two referees and two assistant referees found guilty of poor officiating and mismanagement.

National Daily gathered  that head of Refereeing/Secretary of the Referees Committee of the NFF, Hon Sani Zubairu, FIFA rtd, the centre referee in charge of the South West derby in Ibadan, Shooting VS Remo Stars,  Joseph Ogabor, has to be stopped from further appointment of matches till the end of the first stanza of the league over an improper action of denying one of the teams, Remo Stars goal which affected the result of the match, Zubairu said.

Referees Committee after a careful watch and review of the match discovered that the new FIFA referee erred in his decision thereby attracting a match ban sanction. His assistant referees in the match, Bosede Momoh and Hulda Nkwocha were warned to brace up and also improve on their cooperation skills or risk sanctions.

One of the Assistant Referees in the Kano Pillars vs Enyimba, Tejiri Digbori, a FIFA referee was also charged and found wanting for attempt to cancel a goal arising from poor offside judgement in the match played in Kano a fortnight ago, though his decision to stop the goal was overturned by the referee, Quadri Adebimpe, a FIFA referee too who received commendation from the committee for keeping to the tenets of the rules of the game. The defaulting Assistant Referee is also banned till the end of the first stanza.

The Assistant Referee 2 in the Nassarawa vs Ifeanyi Uba, Abdurazak IB of Borno Referees Council has to rest for the next 8 weeks beginning from this weekend’s matches for not only picking a wrong infringement on the field of play which misled the referee from awarding an undeserved penalty, but also rushed to the penalty area line before the referee actually signalled for a penalty; an act the Committee considered at variance to the Laws of the game.

The referee was seriously warned to live up to expectations in subsequently matches and banned for 2 weeks for falling to the weakness of his assistant referee in identifying location of fouls and misconduct, and management of penalty kick, as well as caving into the decision of the AR without proper clarification of the incident.

The Head of NFF Referees Unit/Referees Committee Secretary, Zubairu noted that the decisions were arrived at after watching video clips of all the matches including match reports from Referees Assessors adding that referees should be fair and firm in their assignments to avoid running foul of the Laws of the Game  that would earn them  disciplinary sanctions.