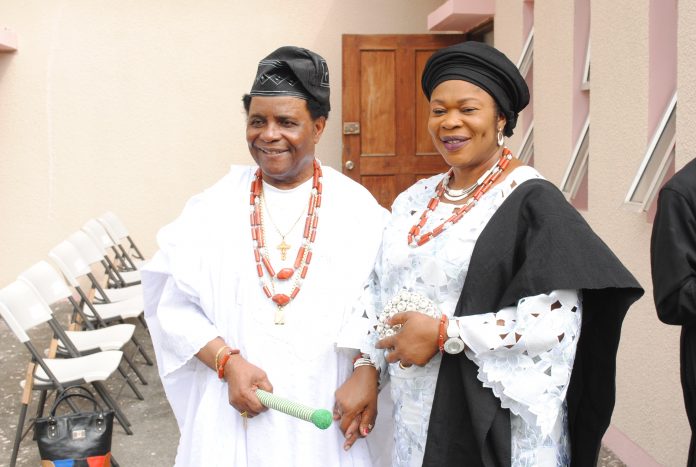 General Oluyemi Bajowa (retired) celebrated his birth anniversary with gratitude to God who has shown him favour and gesture of grace, love and kindness. This he revealed at the celebration of his 77th birthday, which he marked with a Thanksgiving service of the holy Eucharist and communion at the St. Joseph Chapel within the precinct of Bajowa villa, Igbotako Osooro, Southern Senatorial District of Ondo State.
The event which held on the 27th of December 2017 attracted dignitaries and men of means within and beyond Ondo state to the country home of the foremost retired Army General.
In his sermon at the Special communion service to commemorate Gen. Bajowa’s 77th birthday, Revd .Samuel Oluwafosile noted that the celebrant is a good example of a man whom God loves, adding that great men whom God has shown love cannot but reciprocate such gesture with an outpouring of thanksgiving and appreciation to their creator. The cleric noted that at all times and in all situation , what God demands from us is to give thanks even as the Bible reminds us that rather than grumble and complain, our appropriate duty to God is to appreciate Him.
ALSO SEE: On that insensitive documentary about Mr. Buhari’s ‘human side’
While calling on the congregation to accept Jesus genuinely as father and provider so that we all can be respective recipients of his favour, Revd.Oluwafosile charged the celebrant to continue to appreciate God with his time, material and substance and also not to relent in providing patronage for the needy.
The congregation joined the celebrant and his wife in a special thanksgiving offertory in the course of the service.
When it was time to give testimony, the celebrant, Gen. Olu Bajowa, the Jagunmolu of Ikale, who also doubles as the Ojagbulegun of Ayeka kingdom, was full of praise to God for sustaining him in good health till this time, adding that since 1961 when he had pledged to God to always celebrate his birthday, he had not looked back. He said his birthday offers him an opportunity to appreciate God for the unquantifiable and numerous acts of kindness he has benefitted from God. Hear him, “I clocked 77 years of age today and I am still bubbling with youthful energy; this is a rare privilege, you know why? My parents were not up to this age before their departure to the hereafter, thus it calls for celebration for me because a very good number of my mates are also no more! It will interest you all to know that I survived six coup d’etat and six cumbersome panel of enquiries which the military junta set up. It takes grace to survive those panels unscathed.” Going further, General Bajowa said it took the rarest kind of God grace for him to escape a bomb blast at Sabongida Ora in which fifteen soldiers were killed in broad daylight , noting that what he needed doing always is to give thanks to God. He did not forget to tell the congregation to always strive to please God in their daily activities as he noted that God rewards those who do his will.
PV: 0