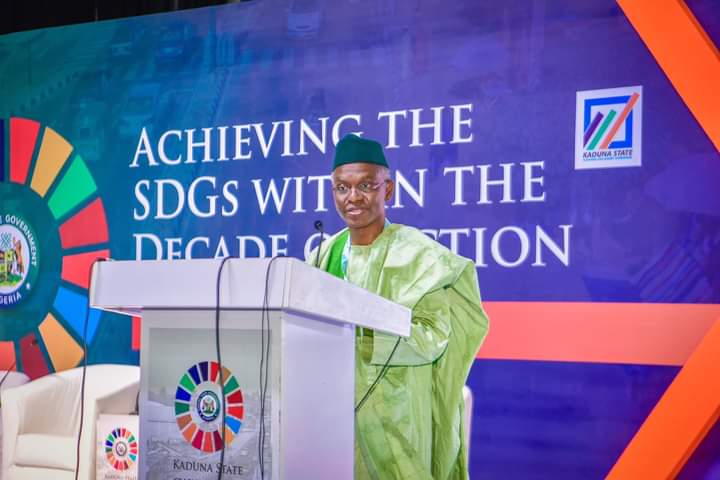 Gov. El-Rufai reels out achievements in SDGs
Share this on WhatsApp
Spread the love

Gov. Nasir El-Rufai of Kaduna State has reeled out the achievements recorded in accelerating 7 Sustainable Development Goals (SDGs) in the state in the last six years.

El-Rufai presented the achievements in Kaduna on Thursday, at the State’s 2022 SDGs Summit 2.0, organised by the SDGs Unit, Planning and Budget Commission.

It was to increase awareness, renew commitment and mobilise resources to accelerate the achievement of the goals.

He explained that the 17 goals, 169 targets and 232 indicators to be achieved by 2030 applied to countries, Kaduna state is implementing goals 1 to 6 and 16, applicable to it as a sub-national.

The governor said that the state had integrated the SDGs into its development plans, to achieve inclusive and sustainable economic growth and social economic transformation.

He said that to track the implementation of the SDGs, the state produced the Kaduna State 2017 SDGs Report, which represents its commitment to explicit, measurable, and ambitious targets by 2030.

On Goals 1 and 2 – ending hunger and poverty – the governor said that the state focuses on creating jobs by attracting foreign direct investment and other domestic investments.

He said that in the last six years, the state has attracted more than 4.4 billion US dollars in investment and created more than 75,000 direct and indirect jobs.

“We have also budgeted and spent nearly N40 billion on the nutrition sector between 2015 and 2022, and created all kinds of skill acquisition schemes for graduates and artisans, including women’s financial empowerment.”

On goal 3, which seeks to ensure healthy lives and promote well-being for all ages, the governor said investment in the health sector has improved service delivery and the wellbeing of citizens.

He said that the government expanded and renovated 255 Primary Health Centres, one in each political ward, so that every resident would be within five kilometers to the health center.

He added that a total of six billion naira was spent on equipping the 255 PHCs and additional 45 rural hospitals in 2022.

“We have also contracted Zipline, a drone delivery company to deliver drugs and blood to hard-to-reach areas of the state.

“We have deployed an electronic health record system and we are at the verge of equipping a 300-bed specialist hospital to make it an advanced treatment facility in West Africa.

“Our administration has equally introduced a contributory health scheme to ensure poor citizens have access to quality health care to address out of pocket expenditure.

“We have also constructed and equipped 20 PHCs to further address infant and maternal mortality in hard-to-reach areas under the 2019 SDGs conditional grant scheme,” he said.

El-Rufai also said that the government had embarked on massive reforms in the education sector to achieve goal 4 through provision of a conducive teaching and learning environment.

“We have established nearly 2,000 Early Child Care Development centres in the public education system and introduced school feeding to encourage enrollment and retention.

“The school feeding raised enrollment from about 1.1 million in 2016 to the current 2.1 million in primary schools.

“We have equally desbursed over five billion naira to students in the form of scholarship, bursary and loans from 2015 to date to provide more opportunity to fund tertiary education,” he said.

Government officials during the official launching of 5 documents by Gov Nasir El-Rufai of Kaduna State at the state 2022 SDGs Summit 2.0.

On goal 5 – gender equality, El-Rufai said that his administration has the only deputy governor in the entire northern Nigeria and had passed legislation on gender and social inclusion in 2017.

He said nine out of 17 commissioners in the state were females, while 53 per cent of government agencies in Kaduna state were headed by women.

“While the national gender target is 35 per cent, Kaduna is between 50 to 60 per cent with over 78 per cent of women apprentice training and skills acquisition programmes,” he said.

The governor said that the state has also recorded remarkable achievements in goal 6 through its efforts to provide clean water and sanitation.

He said that thousands of communities across Jaba, Giwa and Kaura Local Government Areas of the state have attained open defecation free status with many other LGAs waiting to be certified by end of the year.

He said that the government has invested heavily on water and sanitation infrastructure, including 111 VIP latrines, 608 hand-washing facilities, 5,910 water points and 600 boreholes between 2018 and 2020.

“We have also rehabilitated 515 additional boreholes in 2021, completed the Zaria water supply expansion project and constructed nine booster reservoirs and capacity to raise the distribution network.

“We are reviewing the Kaduna Environmental Protection Bill to reintroduce environmental health inspection to ensure a cleaner and friendly environment,” El-Rufai said.

On goal 16 – peace, justice and strong institutions – the governor said that the state had curbed the spread of violence from one community to the entire state through reforms and security infrastructure.

He said that the state has created the Ministry of Internal Security and Home Affairs to coordinate internal security matters and collaborate with federal security agencies with significant results.

He added that his administration also established the Kaduna State Peace Commission to engage communities on peace building, tolerance, and peaceful coexistence.

“We have also invested in technology and reintroduced intelligence gathering using traditional institutions,” he said.

The News Agency of Nigeria reports that other highlights of the event were the presentation and launching of five documents.