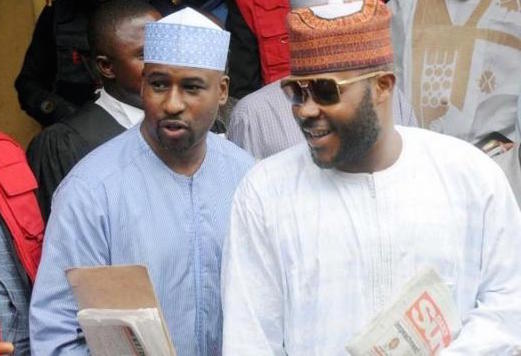 Tukur is the son of the former national chairman of the Peoples Democratic Party, PDP, Bamanga Tukur; while Alao is the son of a former Ibadan-based Islamic leader, Abdulazeez Arisekola-Alao.

The defendants had previously been arraigned before Justice Lawal Akapo on December 10, 2015 for allegedly diverting the money obtained from the federal government for the purpose of importing Premium Motor Spirit.

The counsel to the accused had subsequently filed a joint application seeking to quash the charge preferred against their clients by the commission.

The defence counsel had argued that the State High Court lacked jurisdiction to entertain the matter on the grounds that the allegations against them were oil and gas related, which could only be heard by a Federal High Court.

In his ruling, Oshodi had dismissed the application and upheld the argument of the prosecution.

Oshodi also held that the prosecution had successfully established a prima facie case against the accused persons and described the application as “premature”.

Oshodi upheld the argument of the prosecution counsel, led by Rotimi Jacobs, thereby setting the stage for the prosecution witness, Bawa, to give his evidence against the accused.

The accused, among others, claimed that they had imported and discharged PMS sometime in September, 2011 at a tank farm in Lagos, First Deep Water Discovery Limited, for which they were paid the sum of N626m subsidy.

Also, the accused was said to have received the sum of N595 million from the government after claiming to have imported and discharged PMS at the same tank farm in Lagos sometime in October, 2011.

Led in evidence by the prosecution counsel, the witness said: “The owner of the vessel, MT Deepwater EX MT Valle Di Castiglia, and the claimed tank farm of discharge, First Deep Water Discovery Limited, denied the usage of their vessel for the transaction and, also confirmed forgery of documents submitted by Eternal to PPPRA.

“The EFCC had access to Lloyds List Intelligence and search conducted for the movement of MT Valle Di Castiglia revealed that the vessel was at the Republic of Turkey all through the period that Eternal claimed to have taken PMS from it with MT Deepwater. So, how can a vessel that was in Turkey give products to another vessel in offshore Cotonou?”

He said: “The claimed MT Emirates has a bill of lading dated 28 April, 2011 which gave Eternal a loading cost of about N151.

“However, investigation revealed that the actual mother vessel for the transaction is MT GonHild Kirk, which had a bill of lading date of April 3, 2011, with landing cost of about N141.

He added that search on LLyods Intelligence on Emirates Star indicated that the vessel sailed out of Doven Strait, United Kingdom and arrived New York, USA within the period that the Eternal documents claimed that the vessel was discharging its products into MT Fuliman and MT Panthern.

The case was adjourned to February 26, 2018 for continuation of trial.