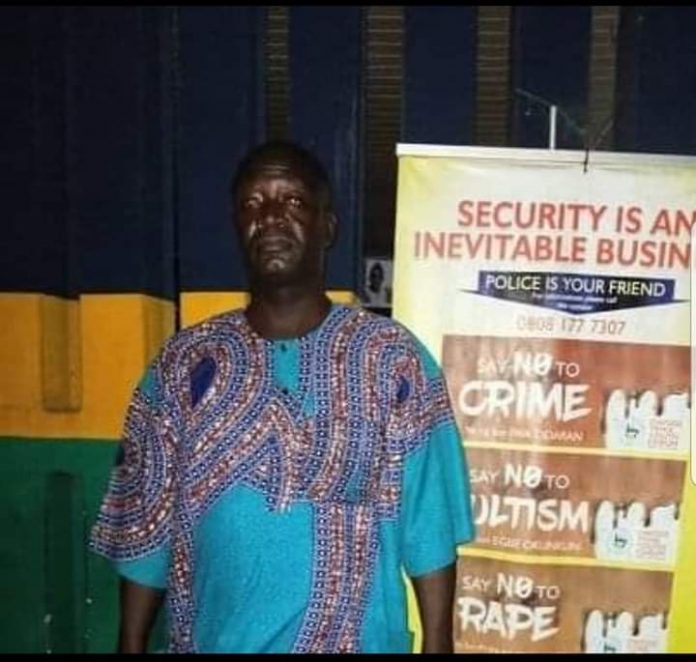 A 44-year-old pastor of the Christ Apostolic Church (CAC), Oluwafemi Oyebola, was on Thursday paraded for allegedly having sexual intercourse with his biological daughter and aborting pregnancies for her three times, National Daily learnt.

Oyebola explained that he was hit by the devil’s arrow targeted at me by my enemies. I could not fathom how i began having sex with my own daughter. It is a shameful act, I agree. But unlike what was reported in the media, I began to have sex with her in 2017 and not 2015 as claimed by the police. Also, the abortion I did for her was just once and not thrice”.

National Daily gathered that Oyebola   was among the 103 suspected criminals paraded by the Ogun State Commissioner of Police, Kenneth Ebrimson, at the Command’s headquarters, Eleweran, Abeokuta attributed his action to “the devil’s arrow” targeted at him.

The cleric, paraded alongside with the nurse who was alleged to have carried out three abortions for the daughter, added that having sex with his biological daughter was not intentional.

He also denied that he began to have sex with her daughter in 2015 as reported by the police, saying the sexual relationship started in 2017.

“I regret my action and I have sought forgiveness from my daughter. She has also forgiven me as she came to plead with the CP on my behalf on Wednesday. I want to sincerely beg for forgiveness from Nigerians; my action was unheard of, and I seriously regret it”, the cleric stated.

Fielding questions from our correspondent, the nurse, Monilola Ogundimu, alleged to have carried out three abortions for the cleric’s daughter denied carrying out an abortion for the girl.

Ogundimu, who said she is an Assistant Matron and Head, Family Planning Unit, Idiroko General Hospital, Ipokia Local Government of the state, disclosed that she only helped the girl to uptake a family planning method as instructed by the cleric, who simply identified himself as Mr. James.

She added that until her arrest by the police, she never knew that the cleric was the father of her client, as he presented the girl as his housemaid and not daughter.